Water Primrose Ludwigia spp, or la Jussie, as it is known in French, is an invasive plant in a number of regions of France. It comes from South America and was introduced to France in the 19th century as an ornamental. There are actually two species: L. peploides (Jussie peploïde) and L. uruguayensis (Jussie à grandes fleurs).

It is a rooting aquatic plant with alternate leaves and yellow flowers 2-5 cm across, which come from the leaf axils. It flowers from June to September. The plant is very variable, with several forms possible.

Jussie growing along the shore of the Vienne river in Chinon, on a bend between two bridges (below). A typical site to find the plant, where the water is slow. 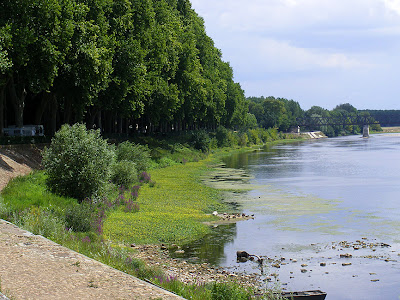 Jussie likes stagnant or slow moving water (étangs, marshes, irrigation canals, water courses, wetlands) and grows best in full sun. Plants can develop in up to 3m depth of water and sit up to 80 cm above the surface of the water. The principal mechanism of reproduction is by cuttings - the smallest fragment will create a new plant, resulting in a carpet of vegetation. They first appear in the shallows, but soon move out to the centre of a body of water, choking out the native yellow waterlilies and water knotweed and interfering with the activities of wild animals.

A thick blanket of Jussie. 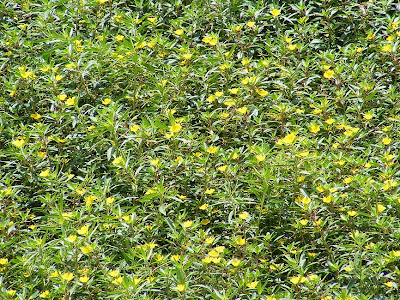 This means that handling the plant in any way can create new colonies, which poses a real danger for aquatic and wetland habitats. There are both economic and ecological consequences.
The public is being asked to help in the following ways:
A pretty picture, but a problem plant. 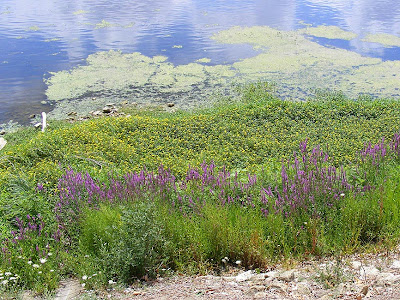 The authorities are considering three ways of fighting this beautiful but problematic plant:
In brief:

DON'T use techniques that break the plant up and thus help to propagate it eg. strimming.

DO act quickly, as soon as possible, when the first plants appear. If you wait it will be too late.

This plant is choking the little pond out behind our house. I think it was brought to the pond during the drought of 2003 when the town trucked water up from the river. It's a shame, because we used to have ducks on the pond. Now the fish and frogs are having a tough time of it. There's only a small area of the surface clear, and who knows how long that will last?