We Need to Know More

A male Gymnosoma sp, golden and globular, about the size of a house fly. 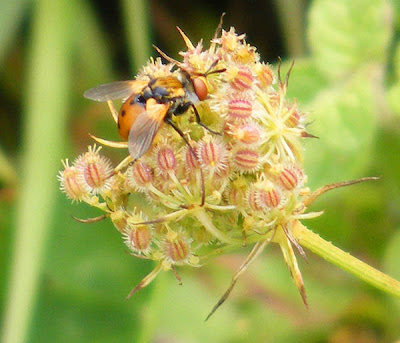 This lovely little fly turned up in the orchard in early autumn last year. It's a type of parasitic fly from the Tachinidae family, called Gymnosoma. This one is male. I can tell that because it has a pattern of spots on its abdomen. Females have a broad irregular black stripe down the middle of their abdomen, or are even entirely black. Sadly, I can tell you very little more about it. Gymnosoma are impossible to identify to species level from photographs. They are not uncommon, but not overly abundant either, usually seen between July and September. Because they are difficult to identify precisely, even if you have a specimen in the hand and under magnification, we don't even know exactly how many species we have in Europe.

I will be collecting any I see this year and sending them to an expert to identify. Sadly, this does mean that they will have to be killed, but the ends justify the means in this case. What we do know about Gymnosoma is that some species are parasitoids (ie parasites which kill their hosts) of shield and stink bugs (punaises in French). Some of these bug species are serious horticultural or agricultural pests. It would obviously be useful to know as much as possible about each Gymnosoma species, after all, perhaps there is the possibility of using them as biological pest controllers. To do that, we have to start by identifying specimens in the laboratory. These specimens are kept, with all the data relating to their capture carefully recorded, so eventually we can build up a picture of where species occur, at what time of year, what their preferred habitat is and so on. As the taxonomists in the lab learn more and pass the information on, workers in the field will start building up a picture of the various species behaviour too. Ultimately, we may even be able to identify some specimens in the field by a combination of physical characters, behaviour, time of year, location and jizz. For example, my specimen has golden dusting which runs to the tip of the scutellum (the little projection between the thorax and the abdomen). This allows me to eliminate some species, but still leaves me with about 3 possible identifications, which I cannot at present separate. Neither can even the best experts just from the photos. At the moment they need the actual fly, to compare tiny details to other named specimens in their collections.

If you see a fly like this and fancy helping to further scientific knowledge on the subject, please catch it. You can get in touch with me and I will arrange for it to be sent on to an expert for identification. For the specimen to be of any value you need to record a minimum of location (latitude and longitude preferably) and date. Other information, such as type of habitat and weather conditions are also useful. Even if these flies have no potential on a commercial level as biological controls, it is important that we know how they fit into the ecological network.


The photos below show a lookalike you may encounter. They are a close relative of Gymnosoma called Ectophasia crassipennis, and quite common. They are easy to distinguish from Gymnosoma because they are bigger, more the size of a bluebottle, and have dark patches on their wings. 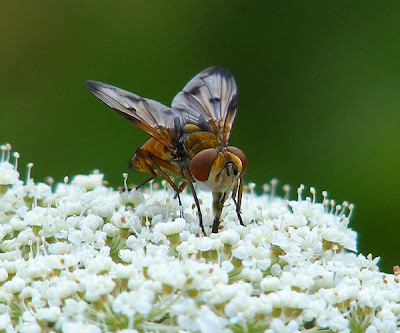 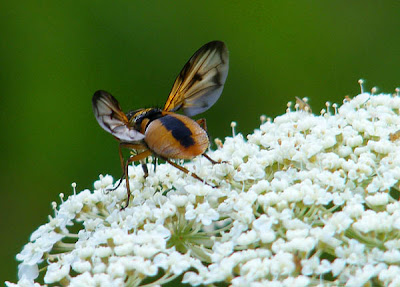 On the subject of insects and parasites, our spring pump sucked up a couple of strange-looking very long wire-thin creatures, that I was fortunate enough to discover in the swimming pool before the gîte tenants came down in the morning! They seemed quite content to be swimming around in the not excessively chlorinated water. Must have been a good metre long, unravelled. Can I can on your expertise and ask what they are?

Peter: my best guess would be horsehair worms. Google them and you will get lots of info.