Last time I wrote about the upstairs bathroom we had just started painting.

This was a bit of a process as the paint had to go on the sloping ceiling behind the beams, without too much going on the beams. I spent a couple of days working my way around the room and ended up with something that didn't completely offend my eyes. I know no-one else will notice the flaws (at least they had better not) and that when I am in the bath with my glasses off I won't be able to see them, but just knowing they are there upsets me.

After the ceiling was painted we started on the walls. A lot of time was spent discussing colours as we needed something to go with the very expensive sliding cupboard doors (as mentioned here) and the tiles we bought last year. In the end we chose BricoDepot Khaki Vert - a colour that looks green or brown, depending on the angle you look at it. The paint didn't fully behave: modern paint has so much plasticizer in it that it goes on in a sheet - and peels off in a sheet if it gets damaged. Eventually that too was sorted.

The two colours of one paint.
It can also look very brown 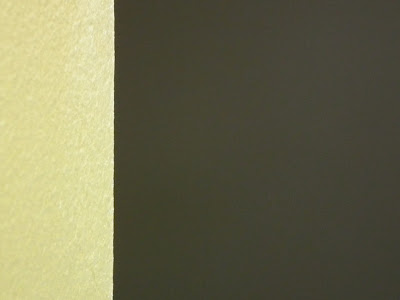 After that it was tiling time. The tiles are from Lapayre and were exactly what we were looking for. We discovered later that if you can work out what the manufacturer's name for the tiles are (Lapeyre invents all its own names) you can buy them slightly cheaper elsewhere (Bo Karo are particularly good in this respect; especially when it comes to plinthe, which was half price.)

Starting to tile - you can see how much
the dust just hangs in the air. 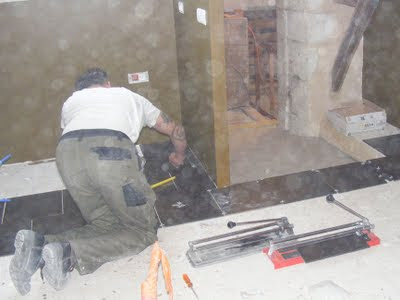