Even though we have had some frosts back in October, there is still one species of dragonfly on the wing. Sympecma fusca is not called the Common Winter Damsel for nothing. In fact, they can be seen in any month of the year, and unusually for dragonflies, overwinter as adults.

Like all dragonflies, they have a face only
an entomologist could love. 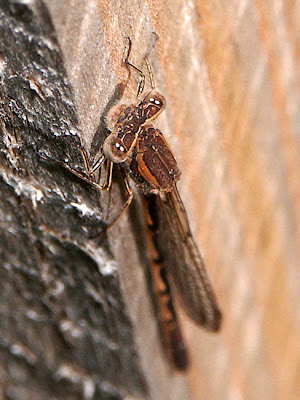 At this time of year they are particularly lovely (in their discreet and subtle way). The young damsels are various shades of beige and brown, with coppery backs. By the time winter is finished the copper will have faded to a dark matt brown. Curiously, hard winters suit them and the following spring breeding season is more successful than after a mild winter. 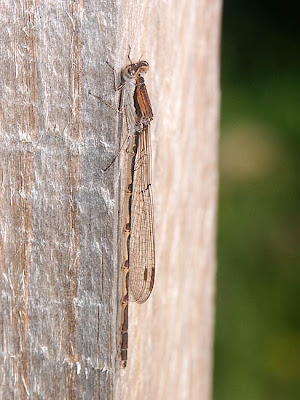 They are very common around here, as they are a lowland species which breeds in still water, such as étangs (fish ponds). In the autumn they are found far from their breeding sites, which is why they appear in our orchard, as they hunt and seek protected spots to shelter themselves over winter. 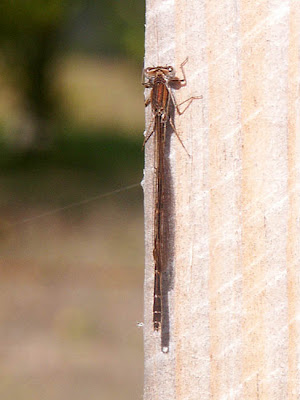 They are not threatened in France, but in other countries their numbers have dropped dramatically due to the accumulation of agricultural chemicals in lake water, over exploitation of fish farming (reducing breeding success), winter cutting of reeds, too dense a growth of trees at the waters edge and the clearing of forest undergrowth (destroying winter shelter).

They are one of the easiest dragonflies to photograph, as they are clearly confident that their camouflage is effective. You can get very close while they just sit there. If you do get close enough to make them move they just drift off gently, so as not to make it too obvious.

Susan, Love dragon flies and you excellent pics.
Here in Victoria the farmers are VERY concerned with the locust plague this year. After many dry years and now with a wet season, they are on the move towards Melbourne.

I think all the damsels look wonderful... and they and dragonflies have been the inspiration for many radio designers!