Remember to Look Down 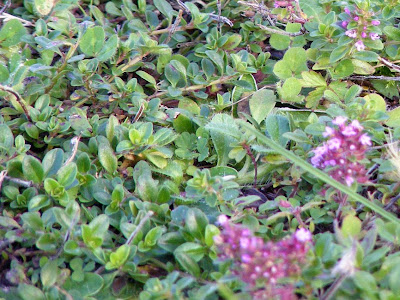 Next to the library in Preuilly is a small area of 'lawn' on a south facing slope. It's always a delight to check it out in detail. There's not much grass there. Most of the permanent green is provided by wild thyme, still flowering even in November, and giving up its savoury scent when stepped on. 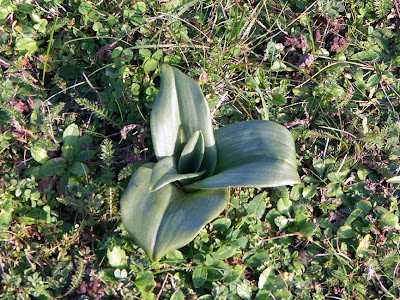 Dotted amongst the thyme, clover and other low growing greenery are about 50 young Lizard Orchid leaf rosettes. They are recognisable from the other wild orchids that emerge at this time by their very broad leaves (more than 2cm across), in rosettes with more than 4 leaves. They've come up, as they do year after year, in the hopes of being able to reproduce by seed in the summer. No chance. Year after year, the council will mow them off before they flower. Can't have 40cm high weeds in the lawn, after all. I think I may have to have a word with the mayor's adjoint, and see if I can get special dispensation for them.

Club Fungi - no idea what species or what the French name is. 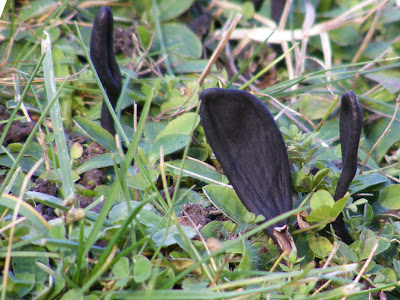 Joining them in this damp (and unusually mild) weather are some rather striking Club Fungi, velvety black and looking like little rabbit ears coming out of the ground. Just as we were photographing these two of our elderly women neighbours passed by on their way to the cemetery. We were promptly informed that they were no good to eat, which amused me (presumably the only reason to be interested in fungi is to establish whether it is good to eat or not...)

Ahh, the French. Lovely ladies.
Hope you do go to the adjoint
armed with some of your great
photos.

Oh I can just see those elderly French women now with raised eyebrows & knowing looks advising you on the fungi eat-abilities! Classic.
The lizard orchard rosettes look wonderful, what a shame they get mowed to lawn length.