Yesterday's Remembrance Day service in Preuilly sur Claise was cut short, due to a combination of circumstances. We met at the Mairie at 10.45 (although we arrived at 10.30, and left again for coffee at l'Image), walked to the War Memorial (down the Grande Rue and across the bridge) to attend to the wreath laying and the official presidential speech (here, for those who missed it), then walked back to the Mairie. 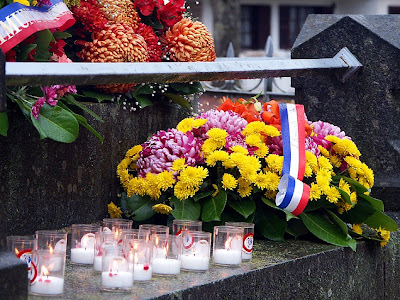 At that point we were invited back to the Salle des Fetes for a reception, whereas normally on Remembrance Day we would have walked on to the cemetery. The main reason for this was the weather - it was foul. Very wet, windy and cold. There was, however, another, more human reason.

For some reason the public address system (battery powered) hadn't been recharged, making speechifying and playing the music (various bugle calls, La Marseillaise) difficult. This was overcome by using a car battery, but I think the draw on the system was such that even that battery was starting to flag. 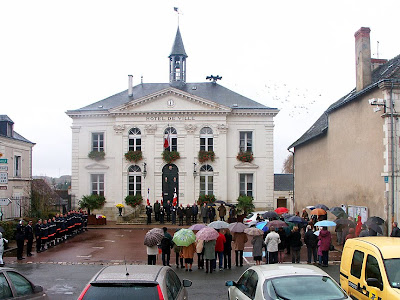 It wasn't the biggest turn out we have seen at a memorial service in Preuilly, but it was good to see that parents are bringing their children, and the children are behaving.

It's just a pity that some motorists can't behave as well. As usual there were impatient drivers who needed to be somewhere so urgently that the felt obliged to try force their way through a group of people walking behind a flag at 11.00 on 11 November. 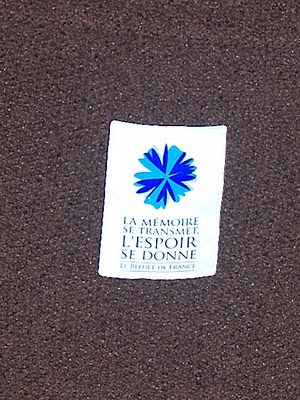 Yesterday I mentioned the bleuet (cornflower) badge. This is Susan's from yesterday.

Impressive looking mairie...just
looking at that photo of everyone
huddled under their umbrellas
brings me a chill. Audio powered
by a car battery seems to add to
the small town charm too.