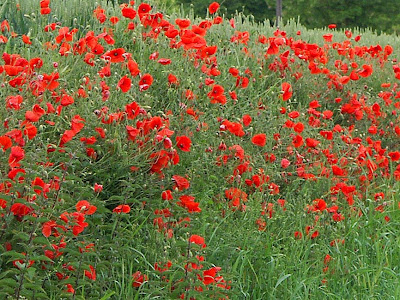 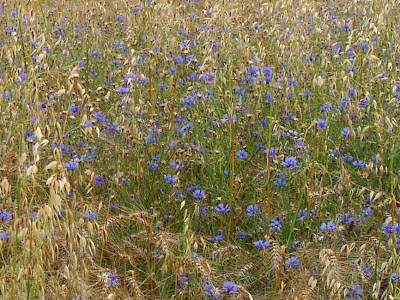 In Britain the poppy, but in France the bluet (cornflower). The flowers are used as symbols of remembering the dead of the First World War, and raising much needed funds for the support of ex-servicemen and their families.

In the UK there is huge pressure placed on people to wear a poppy, and the date on which they appear is getting earlier. When we arrived in the UK 12 years ago, poppies came on sale the week of Remembrance Day. Five years ago they arrived on the 1st of November, and this year they arrived on the 26th of October. Anyone appearing on TV in the UK not wearing a poppy gets accused of dishonouring the dead, and there are letters to the newspapers (I would guess from people who can't be bothered actually going to a Remembrance Day ceremony) in incandescent outrage.

In France, little stickers with cornflowers on them are sold at the start of Remembrance Day ceremonies, and in Preuilly sur Claise half the town seems to attend.

The difference between the two countries is greater than simply that of language.

Thought provoking, Simon, and a great header to go with it!

It is the same M.O in Canada. I got mine on the 28th of October.

Like Simon & Susan I attended today's ceremony at Preuilly; as ever it was moving. I think comparisons are very difficult, but I wouldn't be confident over asserting that the event is taken less seriously in the UK. I am inclined to think it is gradually being taken more seriously. Certainly in most state schools in the UK there has been increasing observance of the Silence. It was good here to see the involvement of children. Traffic passing by here did not seem to slow any more appreciably than it might have done in UK.
Perhaps the recent willingness of UK politicians to engage in war, with the consequent return of coffins, has meant that UK awareness has increased of late.

I think you're right - they day has huge significance (and maybe growing significance) in the UK - it's the "musr wear a poppy" brigade that get me...

Simon, I just wrote a long comment but it disappeared during the editing process. If it reappears then I will apologise here for the mistakes I know were there!

To cut a really long comment short, I wanted to agree with John that most schools in the UK observe the Silence on Remembrance Day and many like mine will use it for assembly themes during this week. The vast majority of pupils respond really well - in school at any rate.

Think the main reason why poppies are on sale earlier is the need for the Royal British Legion to raise funds to support our veterans. Sadly with the current conflicts our veterans are getting younger.

I love the idea that the flowers we use in both France and the UK are simple, striking and wild.

Isn't there a Pete Seeger(?)song I remember from ny early teens starting
'Last night I had the strangest dream.........
I dreamed the world had all agreed, to put an end to war'

Simplistic and idealistic I know, but ever hopeful! I can feel a Y8 assembly theme coming on!!!

Agree with your thought. Came back to the UK 5 yrs ago after living for 15 yrs in The Netherlands and found the same; poppies on sale ever earlier.

My experience isn't that Remembrance Day isn't taken seriously in the UK. For example saw everyone stand still for 2 mins silence in our local Sainsbury's last year. It is just the 'poppy pressure' as expressed by "outraged from -----" which irritated me.

BTW really enjoy your blog as we have just moved to Charnizay.

Welcome to the blog, we're glad you enjoy it. We like Charnizay, and have eaten at la Gargantua, which is a little gem. I agreee about the people Jon Snow (or is it Peter) refer to as the "Poppy Nazis"