So What is a Château Then?

A good question, and one I am glad you asked.

Because the word looks sort of like "castle" (and originates from the same Latin root - castellum - via the old french chastel as castle), it would be easy to think that a château and a castle are the same thing.

The nearest English equivalent would be a "hall", "manor house" or "country house" - somewhere where a member of the ruling classes has either their power base or what we would think of as a second home in the country. This is not to be confused with the English "stately home", which is a house which has a suite of state rooms: rooms which are set aside for use by the head of state (i.e. the King or queen).

In France, this would be a château. Thorndon Hall, Essex 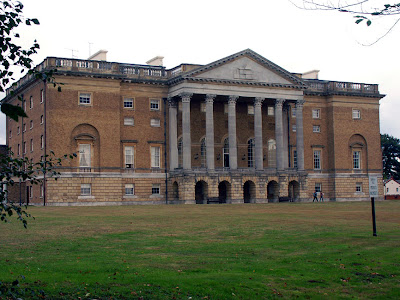 This is why sometimes you see Château de Versailles (in French) as Versailles Palace (in English): the French word château covers so many things. It is also why it seems that just about everyone who owns a detached home of any sort of size in the country claims it to be a château, even though it obviously isn't a castle.

The urban equivalent is a hôtel particulier , the English equivalent being the original "town house" (a word which has since broadened its scope). Buckingham House was an example of this.

A hôtel particulier, in this case the Hôtel de Sens in Paris. 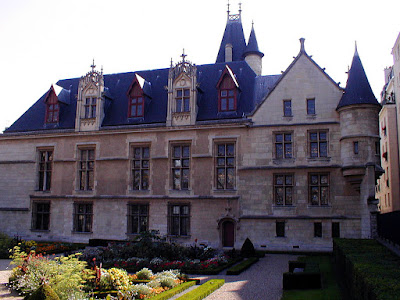 And then there's the château d'eau.

I would have mentioned them, but that would have been plumbing the depths of my knowdlege.

errr...... no make that plumbing the heights of my ignorance. (can you do that?)

You have given me the ide foir a book though: want to collaborate on a coffee table book about them?

There are also the chateau de cartes.

Simon, your post reminds me of a story my brother told me a long time ago. He was visiting in England and at some point he asked the tour guide what was the name of that castle there, pointing. The tour guide looked at him and said: "Oh, you mean the chateau." Then, what is a chateau in English? All of it or none of it?

chm. I would have mentioned them too, excpet there are none left in this area. For some reason they keep falling down...

As for "the Chateau" I imagine it was the name someone gave to their house to borrow some implied French class. Either that or it was a snide local name given to the house because the owners had airs and graces above their station.

i always wondered what the distinction was for 'stately home.' And Bleinheim is called a 'palace' and Woburn an 'abbey'...so many different types in English.

Diogenes: Marlborough was given a huge grant by Queen Anne and allowed to build Blenheim as a palace by extra special dispensation because he was such a hero for defeating the French and their allies in 1704. Woburn is on the site of an abbey but became a grand country house after the dissolution by Henry VIII.

After reading your post, I looked up the word palais in French and learned that "palaces" are urban while châteaux are rural. So it's the Palais du Louvre, Palais Royal, or Palais de Justice inside Paris, but Versailles being out in the country it's palace is a château.