In other words, Coypu Myocastor coypus (Ragondin in French) and Musk Rat Ondatra zibethicus (Rat musqué in French) are vermin and there is an organised campaign in Indre et Loire to eliminate them to protect plantlife. Although the document refers specifically to the current year, this is an established programme, reviewed on an annual basis. They are considered a risk to animal and public health, and cause damage to agriculture and roadside or train trackside drainage ditches and culverts. The Preuilly-sur-Claise town website has posted the main points of the decree and pointed out that residents must let either the trappers or the Mairie know if there are Coypu or Musk Rat present on their property.

A young Musk Rat swimming up a millstream. 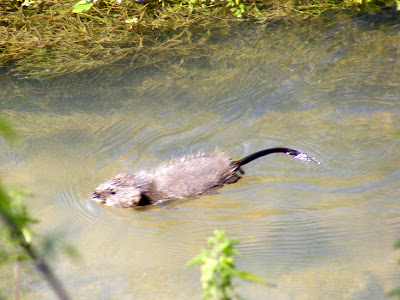 Poisoning the animals is forbidden, but they may be dealt with in the following ways:
Individuals are allowed to trap, but the preferred option is for the organised teams of trappers set up by the département. The trapper network is trained by the departmental hunting association. The commune (local council) advises landowners when trapping will take place and landowners are obliged to provide access to their property. 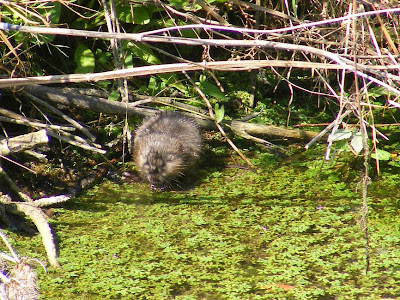 The following people are responsible for administering the programme:
A family of coypu at Chenonceau. 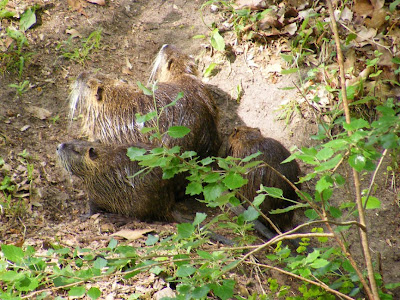 Curiously, the decree gives no indication of what the approved method of despatch is once the animals are caught. Presumably the training covers these sorts of questions (and I am guessing that they are clubbed and sent to authorised landfill). In the nearby Brenne wetland, where Coypu are seriously threatening the rare Large Copper butterfly by eating its caterpillar foodplant, you can buy pâté de ragondin, sold in the maison du pays and marketed as a local delicacy.

Both Coypu and Musk Rat cause considerable damage to river and ditch banks, by burrowing into them and creating entry/exit races. This causes bank subsidence and erosion, putting vegetation at risk and destabilising and changing the profile of the bank and the flow of the river. This would not be such an issue if these species were not so fecund, but like many introduced species, they breed rapidly. With no significant predators, they soon begin to tip the environmental balance.
A large Coypu in the Charentes. 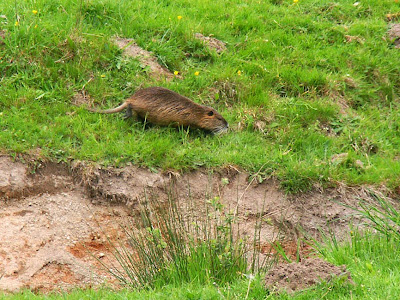 They out compete the native Eurasian and Southern Water Voles Arvicola amphibius (rat taupier in French) and A. sapidus (rat d'eau in French) by their size. A large water vole and a small Musk Rat such as the one in the photos above can be quite difficult to tell apart, but the Musk Rat has a longer tail (keeled and nearly as long as its body, compared to the vole's tail, which is round and about half its body length), the ears are more visible on a Musk Rat and a water vole is a richer chestnut brown colour. A large Musk Rat and a small Coypu can be difficult to tell apart, but the Coypu has a distinctive white muzzle and whiskers and a round tail. Likewise, a large Coypu and a small beaver could be difficult to separate, but the beaver's big flat paddle of a tail is completely different and the whiskers are not pure white. For further details on how to tell the aquatic mammals of this area apart, please see my post on the subject.

They have been able to colonise the rivers once home to the European Beaver Castor fiber (Castor d'Erasie in French) because the beaver was hunted to extinction. The beaver, reintroduced in the 1970s, is clearly re-establishing itself. They now average a family every kilometre on the Loire, and are reported in the tributaries as far down as le Grand Pressigny. As a resultit is possible the Coypu will be pushed out to some extent. However, their lifestyles are different, and they don't compete for food, so the Coypu may not be greatly affected. Musk Rats and beaver appear to live on friendly terms, and in North America are known to share the beaver lodge on occasions, so it is unlikely they are threatened by increased beaver numbers.

Although Coypu and Musk Rat are theoretically nocturnal creatures, I have frequently seen them in the middle of the day, swimming or feeding. All of the pictures above were taken in the middle of the day, and they are often not particularly bothered by the presence of humans. Beavers, on the other hand, are much more difficult to spot. They spend a lot of time in the lodge, and the best time to catch a glimpse is at dusk during May and June. The rest of the time, you have to make do with signs like gnawed trees and footprints.

I don't think everyone will be pleased if the Coypu and Musk Rat are eradicated. Muskies are rather sweet and fun to watch, and because of their smaller size, their earthmoving activities cause a lot less damage. The group of Coypu which has ensconced itself in the ditches at Chenonceau are also now a tourist attraction. I noticed earlier this year that the gift shop has even gone so far as to stock a range of Coypu soft toys. I didn't know whether to be horrified or amused!

Two very intereting posts,
Susan. I walk my dog along
the Guadalupe River here in
Texas and have seen muskrat
corpses on occasion. The
beaver leave their mark on
the cypress which line the
riverbank by chewing away the
bark just as you said.

The photo of the vole is
adorable. Leave it to the
French to come up with
ragondin pate. No thank you!

Sheila: how about terrine de lièvre des marais then? (same product, different packaging...) The vole is 'code named' Helen. The reason she is being handled is because she was being weighed and measured in a monitoring programme. She certainly is a cutey.

Sheila,
Friends of mine in northern Pennsylvania, very "green" oriented, had a very large property inhabited by beavers. From time to time they had to trap some of them in order to keep a healthy balance in their population. The animal were skinned and my friends kept the meat for their dogs in the freezer. Once some mistake was made and, unknowingly, they cooked and ate the meat of one beaver. They were delighted to find how delicious that meat was, once they found out later about their mistake.
I tasted beaver meat at their place and I agreed with them. Even though they have been American for several generations, they were francophone and francophille. Maybe that's why! LOL
P.S. Dogs had to be fed something else!