Wolves in the Touraine

Until the last couple of hundred years, the people of the Touraine lived with four great fears - war, epidemic disease, famine and wolves.

Wolves were top of the food chain in the countryside, roaming around farms, snatching dogs and children, attacking people walking through the woods, devouring sheep and shepherds. Today it seems unbelievable, but the parish records abound in accounts of wolf attack in the Touraine.

This enormous wolf (below), about 2m from nose to tail tip, was actually shot in Poland, but now hangs in the dining room in the château de Montrésor. 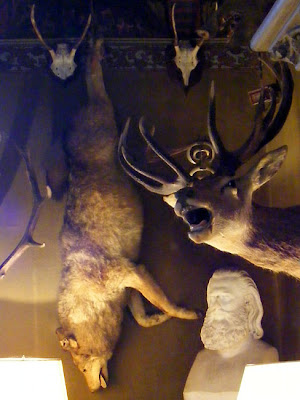 For example, in 1678, at Saint-Benoît, the body of a 12 year old girl was discovered near la Maison-Rouge. 'She had been taken twenty paces from the aforementioned house and taken away by a ferocious beast who had partially devoured her...'

The following year, in the same parish, a 6 year old boy was seized by a wolf and taken away into the forest. A week later he was found: 'The animal had eaten all of the head and body down to the navel'.

A few days later, again in Saint-Benoît, ' some small bones which were said to be those of Antoine Bezanceau, aged 18' were buried. 'He was recognised thanks to his doublet and hat'.

Saint-Benoît was a community surrounded by woodland, so it seems natural that wolves chose to frequent the area, but even open countryside was dangerous and could have wolves present. For instance, at La Chapelle-sur-Loire, in the middle of the flood plain, Catherine Parfait, aged 17, is recorded as having been 'strangled by a ferocious beast' in 1693.

The same year, at Restigné, two brothers and a child were 'devoured by the beast'. Twelve people perished in the same circumstances at Benais and seven, including a mother and son, at Bourgueil.

There are similar records from 1701 to 1716 for Saint-Nicolas and Restigné. It seems to have been accepted as part of normal life - the priest at Benais wrote in 1713: 'Burial of Noëlle Favereau, aged 12, devoured by one of those ferocious beasts who eat the shepherd boys and girls this year'.

The wolves pressed even as far as the gates of Tours. The records for Fondettes in 1695 reveal: 'This day, we buried the head of François Marionné, aged 7, devoured by wolves in the coppice of Bois-Jésus. The said wolves have devoured many other children in our parish and in that of Saint-Cyr in the last 15 days...'

When a wolf was infected with rabies, the danger was even worse. No vaccine existed, and anyone bitten was condemned to atrocious suffering, after which they died. In the Touraine one of the most famous cases was the she-wolf of Cravant, who, in 1814, bit 21 people before being slaughtered. No one survived.

These days, wolves have disappeared from the Touraine. Between 1815 and 1870 the lieutenants de louveterie were employed to control the wolf population. They organised methodical beats of the countryside, assisted by skilful peasants and local squires, whose passion for hunting was well known. Attracted by a bounty of 18 francs for a she-wolf, 12 francs for a male and 3 for a cub, they were happy to spend long nights on lookout. Wolves were massacred by the hundreds, by the thousands, and disappeared. One of the last succumbed in 1879. A butcher from Cheillé hid every night in a clump of trees and attracted the wolf by calling into his sabot to imitate a she-wolf. The approaching wolf received a volley of buckshot and fell dead amongst the ferns.

Nowadays, you no longer hear the cry which in the olden days would send the people into a panic: Au loup ! Au loup !

Email ThisBlogThis!Share to TwitterShare to FacebookShare to Pinterest
Labels: Montrésor, nature and wildlife, Pictures of Chateaux

Enjoyed this post Susan.
Montresor is also one of our favorite petite chateaux.
Leon

This was fascinating. I had no idea that wolves attacked people, or even that they existed in central France - I wonder what the impact was on the environment once they were eliminated...

Leon: Montrésor is one of the best genuinely timecapsuley château, for sure.

Diogenes: Man took their place at the top of the food chain and top predator.

Wow.., that's one huge wolf, I had no idea wolves favourite meal was human, but come to think of it, they did have a pretty bad rep, so guessing it was well deserved huh, thanks for sharing this Susan, interesting.

Where we live there is, right now, a wolf-family of six. Four of them borned in april this year. The hunters goes mad and wants to shoot them but the authorities wont allow that. Two huntingdogs had been attacked while disturbing the wolf-family. Some people don´t dare to go out when it´s dark. Whilst other knows that wolfs don´t attack people and wont mind skiing or take a walk in the forest. A few people have been lucky enough to hear them howl. But no one has yet seen them. Fascinating animals. We are lucky to have them so close.

Dear Susan
Terrific blog ~ I've written a short review and link to your pages at http://jimmcneill.wordpress.com/2010/12/10/not-more-werewolves-no-hear-the-wolves-of-the-touraine/

Dear Susan
Terrific blog ~ I've written a short review and link to your pages at http://jimmcneill.wordpress.com/2010/12/10/not-more-werewolves-no-hear-the-wolves-of-the-touraine/