Every November some of the local fish ponds (étang) are emptied. This is done on a rotational basis, so that individual ponds are emptied on a cycle that may be as short as two years, but could be as long as seven. Members of the public are invited to attend, and the resulting catch can be purchased in bulk very cheaply.

This weekend it is Le Louroux's turn, and since Le Louroux is one of our favourite places we went along yesterday to take a look. We'd noticed some weeks ago that the lake level was dropping, as they progressively dropped the water level in preparation for the big event this weekend. If you are in the area, they are still rounding up the fish and finishing the drainage of the lake today. It's an excuse for a fête, and a most interesting day out. If you miss Le Louroux, then the Grand Etang at Martizay is being drained next weekend.

Water rushing out into the Echandon River from the étang
through the sluice system (with flow directed by the clever
and judicious use of haybales). 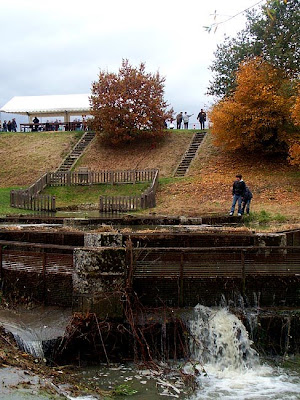 The emptying of the étang is necessary to manage and harvest the fish, but also allows work to be done to improve the quality of the water and to preserve and augment biodiversity. A traditional fish netting was organised to capture the pike (brochets), zander (sandres), perch (perches), carp (carpes), tench (tanches) and roach (gardons) living in the lake. It's very important for ongoing water quality that the base of the lake is aerated periodically, so the sediment is exposed from time to time in a managed way. It is drained every year or two, and about 10 tonne of fish recovered each time.

The fishermen use dragnets (sennes) of different gauges to catch different types or sizes of fish. Big carp and pike come out first, then the more fragile zanders. The remaining little ones are chased around inside the main net with hand nets. They are taken over to sorting tables, weighed and delivered to the sales tent or put into tanks ready to restock other nearby étangs. This year's little roach and some big carp and pike are put aside to restock Le Louroux itself.

Netting the last of the fish. 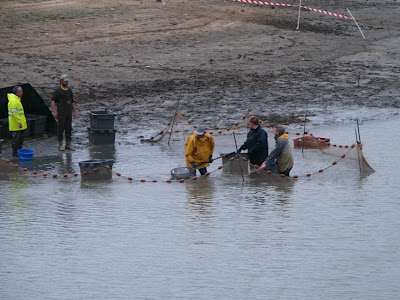 The étang at Le Louroux is the biggest fish pond in Indre-et-Loire and one of 10 'Espaces naturels sensible' (Sensitive Natural Spaces) owned and administered by the département since 1990. Its flora and fauna is exceptionally rich, with 200 species of birds recorded and it is a favoured site for passage migrants. The money raised by the sale of fish goes towards the management and development of the site. 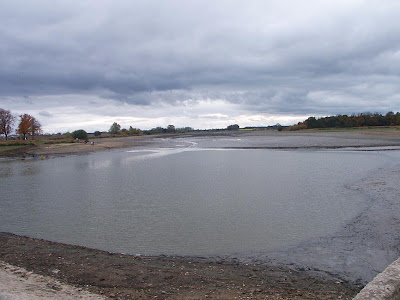 The nature reserve covers 110ha, of which 60ha is the fish pond itself. Historically, the étang was part of the fortified priory at Le Louroux. As an ensemble, the village, dyke, mill, lake and priory present a rather fairytale aspect today, but the étang is the result of some hard working Benedictine monks (or more probably, their lay brothers...). The River Echandon was dammed, and the pond profile dug by the 11th century Benedictines. They would have managed the étang they created in an almost identical way to what we saw yesterday.

Email ThisBlogThis!Share to TwitterShare to FacebookShare to Pinterest
Labels: Events, Food and Drink, nature and wildlife, Towns and Villages near Preuilly

Very informative post on how to manage those étangs in the Brenne. I wonder if they do the same thing in Sologne.

I've seen only one picture of the Louroux Prieuré. It looks very interesting and made me wish to go there one time. Who knows?

Apparently the people managing the fishing were from the Brenne... and there was a stall selling "Frites du Carpe"[hot] and Rilletes du Carpe... both excellent. I think that, if the Brenne didn't exist, the management of the fish pond would be very hit & miss.

In two years time I must remember to take my polarizing filter... they had a couple of "ponds" that consisted of hay-bales and plastic sheet/pond line. These had specimens of the fish... Carp, Roach, Perch and Jack-pike... but no Zander... all difficult to photograph clearly with the bright haze reflecting off the water.

CHM: How about for our outing during your summer visit next year we visit Le Louroux and lunch at the Auberge in Cussay?

Tim: The haybale ponds were great weren't they? Simon got a shot of a pike, and both the carp and the pike had splendid gilded scales in places.

Fascinating post. I wish I was there to take a look. My father and I used to fish any time we could when I was growing up.

Agreed, fascinating post. Is this something that is done in other parts of France? I suppose this allows the authorities to control some species taking over (like carp, as so often happens in the US).

Susan: That's a deal. But first I'll have to know how Ken and maybe Walter feel about it.

Ken and I wet through the Brenne on our way down to St-Savin several years ago but didn't stop. I'd love to see it a little closer.