Work Starts on the Kitchen (sort of...)

This is the moment Susan and I have been waiting for: the moment when we start work on the kitchen.

Of course, being this house, there are one or two issues to be sorted first, the first of which was a problem we encountered when working on the office: the window had no lintel. Five metres of brickwork resting on a badly designed wooden window frame was a problem that had to be addressed, so it was our first task yesterday to put a lintel in.

Luckily, this time we had a piece of wood that was as thick as a brick, so it was just a case of removing five bricks and cutting the wood to length, the judicious use of cement to hold it in place, and Bob's your uncle. Today we will be screwing the window frame up into the lintel, thus ensuring the window doesn't just drop out (something that was possible, if not likely).

Cutting out the bricks to make room for a lintel
More dust, as usual. 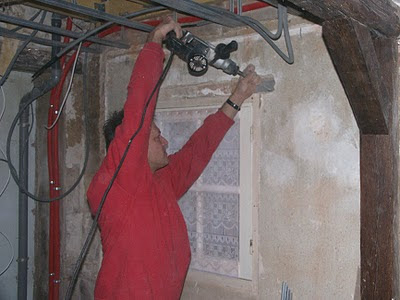 In the afternoon we started work on building the frame for the new wall. This will hide huge amounts of insulation, and the calcaire filter we have had fitted to where the town water comes into the house. We are losing about 15 inches of space on one end of the wall, but as this was unusable anyway it isn't a problem - except visually at the moment, because we can see all that space behind where the wall will be.

New Lintel (and half the wall frame) in place 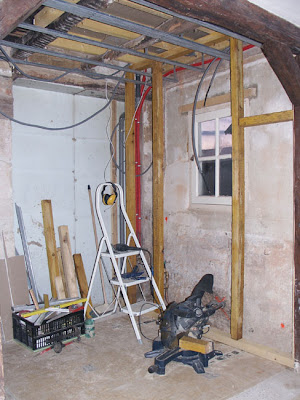 Yesterday evening I spent some time using expansive mousse (the squirty can insulation stuff) to fill in cracks between the bricks, the window frame, and holes which have been drilled in the past to take pipes and cables. Today we finish the wall frame and insulate before moving on to the main kitchen wall.

This means we will be demolishing the last remnants of the previous kitchen - the sink unit has to go!

Oyve! After remodeling 3 houses, I can only imagine what you are going through. You both seem to have a lot of patience and must be easy going.

Nadege - You would be welcome any time to lend your expertise!

The wood was "thick as a brick" ... my 1960s mind went to Jethro Tull. Are you putting drywall over the framing?

Diogenes: I think you need to click on the link...

Years ago we did a renovation in an old house and had to wall off a cupboard. Just for fun we put in a sort of time capsule which included the day's newspaper and other things like photos of the family which had lived there for 50 years. Your empty space may not seem so empty if you put something like that in for future archeologists or renovators.