A Bit of a Windfall

And for once, I'm not talking about apples.

Several weeks ago our 86 year old neighbour Mme B. had a spell in hospital. While she was there her son took his opportunity to clear out her barn. One day an enormous skip arrived on a truck and was dumped in the middle of the street, blocking the way for the entire day. Guy had also called the pest controllers to come and deal with a severe outbreak of fleas in the barn and over the course of the day, Tyvek overalled figures beavered away, spraying, clearing and chucking. My friend Sylvie and I watched from her top window and debated whether we would go down and ask Guy if we could have a couple of the chairs and a wooden chest, but we decided that in view of the possibility they would be infested, we would pass. 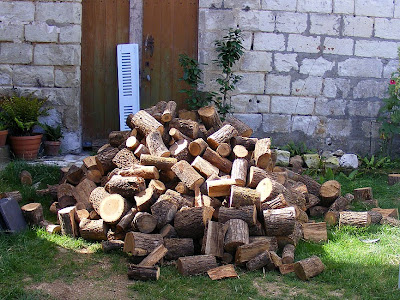 Two skips worth of stuff was carted off, and a few days later we discovered Guy at the brocante, with a stall featuring the best of the barn's contents. He told us there was a quantity of firewood still in the barn and asked if we wanted it. We said we would and arranged to come and collect it yesterday.

The wood is oak, about 15 years old. It is at least that long since Mme B. switched to heating the house with oil. It's cut into 30 cm lengths and will easily fit into our stove. Guy needed it removed because it was stacked up in such a way it was preventing access to the upper floor of the barn, and we had to be really careful when loading our trailer, because the old wooden ladder which lead to the trapdoor was in constant danger of falling on our heads. The wood was also stacked in a window alcove and on top of the well. Now it's gone he can order another skip and ditch the contents of the upstairs.

We figure there is at least 2 cubic metres of wood, which at today's prices is worth €80+. Guy resprayed all the wood with malathion (or something of that ilk - it really stank!) so he could be sure it was 'propre', then helped us load it into our trailer, even though he was due to compete in a trompes de chasse competition that afternoon. Neither he nor his mother would accept any money for the wood.

His mother is (inevitably) complaining that he threw out things that she now wants, but as he said, it was an absolute bazaar in there, and desperately needed sorting. It was tremendously kind of them to think of us and very generous of them to give us the wood. I will be buying them a nice bottle of Chinon at the very least.

We've left the wood airing on the back lawn overnight, and today, we are going to tell our visitors that the task is to stack it all neatly in the garage and down one side of the apéro terrace (gloves will be provided).

...Well, visitors have to earn their pear sorbet somehow...

Score! That was really nice of them.

I've enjoyed your blog for quite a while but I don't think I've ever commented. I'm a daily addict for Ken's & Walt's blogs.

What architectural design software do you use? The bathroom plan posted was quite impressive.

Bill. Welcome to the commentsphere. For the simple depictions of how stuff should look I use Google Sketchup. It's a bit of a fiddle at times, but perseverance pays.

While free firewood is a great bonus, if it's been sprayed with malathion, I'd wait more than overnight before putting it anywhere near human contact. That stuff is nasty. And if it's in the wood, it will be released when you burn.

The casual way some people use pesticides amazes me. I wouldn't touch that wood (literally) or put it in the house, let alone burn it. Please look up malathion online and make up your own minds.

Emm and Carolyn: Thanks for your concern. I wasn't too happy when Guy resprayed the wood, but couldn't do much about it. I was also bemused by the fact that he wore a Tyvek jumpsuit but no gloves! We wore long trousers and sleeves and gloves and showered after the job was done. I am well aware of how easily organophosphates are absorbed through the skin, and I recognised the smell from my childhood, when everyones' dogs were routinely washed in malathion for flea control. My reading suggests that burning it is probably one of the safer ways of disposing of it, and I don't believe it is residual enough to still be there when we come to burn the wood anyway. At the moment it is simply dissipating fairly harmlessly into the air while the wood is in a pile on the lawn. We'll give it a few days and stack it neatly somewhere. It's not going to rain, so it shouldn't be a problem.