And the 4th for us yesterday.

The day started with a little snow. I looked out the window when I got up and thought it looked like there was a faint sprinkling on what will become the lawn. Our neighbour Edouard, who gets up much earlier than us, confirmed that it had snowed earlier.

Some snowdrops Galanthus nivalis photographed on Friday in the woods near Humeau. These are doubtless garden escapees, as although snowdrops (called perce-neige in French - 'snow piercer') occur naturally in France, it is only in the mountains, and at less than 100m above sea level, we are definitely lowland. 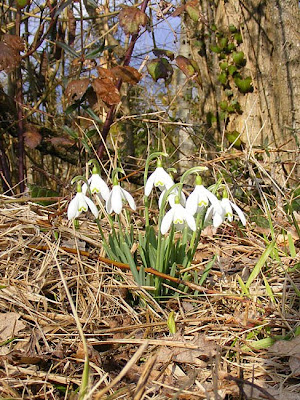 Simon had only just got up when Pierre-Yves knocked on the door. Could Simon come and help move a piano? I asked if they needed me too, but Pierre-Yves replied that he had les deux jeunes this weekend, so I was not needed. The two young men he referred to are Congolese refugees (known as sans papiers in French). They and their classmates, many with similar backgrounds, live during the week at the Château de Verneuil, getting an academic and vocational education, but whenever they can, these quiet and polite teenagers, who have no family in France, stay with local families.

While Simon was off learning a new word (bosser = work, slog, slave), I went to the boulangerie. Once back at home, we grabbed a cup of coffee and went down to the Salles des Fêtes which was the venue for the Foire au Safran. We chatted with various people, sampled various saffron flavoured foods.

Produce from the fair. 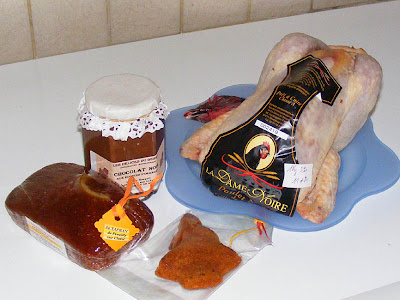 We bought a pain d'épices from Josette Cerniaut. She makes them from organic rye and wheat flour, honey from her own hives and a mixture of spices, which for Preuilly's saffron fair, includes some local saffron. This particular one is also flavoured with preserved oranges. Because this is the third year in a row I have bought something from her, she very kindly gave me a little Christmas tree shaped pain d'épices too.

From Les Délices du Berry we got a jar of pâte à tartiner made from chocolate, milk and cream, sugar and orange rind. We also bought a 'Black Lady' from Fréderic Guillemain. He is the producer from Betz-le-Château who supplies the nearby Michelin starred restaurant. La Dame Noire chickens, also known as La Géline de Touraine, are a local breed, highly regarded for their flavour. They have Label Rouge certification, which guarantees that the chicken is purebred, feed on whole wheat, raised in small flocks of no more than 1000 birds, housed in small traditional sheds and given an outdoor grassy and / or wooded run amounting to at least 4.2 m² per bird. At the time of slaughter the birds are a minimum of 120 days old. These traditional breeds grow more slowly, and never get as big as intensively farmed modern chickens, which are killed at about 80 days.

The pain d'épices sounds good. Do you eat it by itself like we would have a piece of gingercake with a cup of tea ?

Wish I could have been there. We have changed places with you and our winter has taken a turn for the worse again. The odd early sign of spring is now buried beneath the snow again. All the plants and bulbs will be very late, I think, due to the stop-start cold weather.

Jean... the 'pain d'épices' is disgustingly moreish! [With or without Saffron] When it gets a little stale [rare] it is nice grilled slightly with some butter melting on the hot surface.
Susan, please DO NOT mention the 'pâte à tartiner' to Stuart when you come over... he was most disappointed to miss the Saffron Fair [yet again] as he loves the produce from the Les Délices du Berry stall.
We arrive on Friday AM... so anytime after that and before the 13th March will be good for a visit... we are laying that floor so a bell in the evening [after 1900 hrs] to let us know when you are likely to be calling by for a 'bevy'... we'll get some in the 'old' kitchen to chill off.
As Jean said we've got thick snow again [5cm here in Leeds] but the sun has come out in the last ten minutes and it is thawing rapidly!!

Label Rouge chickens are killed at the ripe old age of 81 days (minimum), according to all the labels I've seen. Some I guess then can be older. Other chickens are slaughtered at 54 days -- those are the "modern chickens".

Ken: The blurb that comes with the chicken says:

I assumed the 'normal threshold' figure to refer to intensively farmed chickens, but presumably it refers to the normal threshold for Label Rouge chickens.

Congratulations to both you and the french chickens. Here in Sweden, "the best country in the world", they grow the chickens in just over 30, jupp, thirty, days. At that time they can hardly stand on their feet. The bodyweight is too heavy for their legs. And the flocks are over 40 000. It´s all about the money. Sad to say. The alternatives for the industrial bred chicken are few and hard to get.
Viva la France

Susan, from what I've read, the industrially farmed chickens can be slaughtered at anywhere between 40 and 55 days in France. Label Rouge is a minimum of 81 days for chickens and 94 days, I think, for guinea fowl.

Géline is an old French word for "hen", according to the dictionary. It's derived from Latin gallina.