This is a translation of the text on the table mats used for the Repas Tout Safran.

Since we thought you might be getting bored with saffron
by now, here is a picture of a goat... 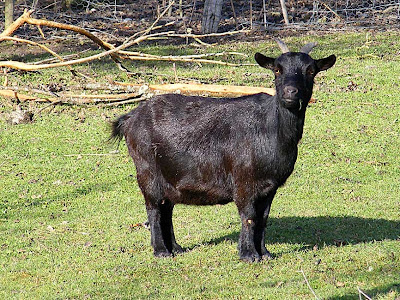 The first Saturday of July sale of bulbs.

The flowers (one to three per bulb) have pale to deep violet corollas, veined with red. Inside are three bright orange stamins on a yellowish style. They surround a scarlet stigma of around three centimetres, branched into three orange red strands which thicken and curl towards the tips. It's this part, once dried, that constitutes the spice.

Planted from mid-July to mid-September, each bulb only flowers once. It is then replaced by one or several bulbs which develop on the upper part. The top dries up, disappearing at the end of the first year, making way for the new bulbs or cloves. 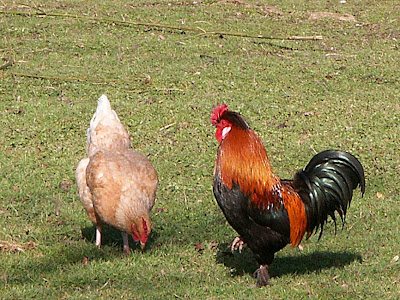 The pale violet flower lasts 48 hours. Harvesting must be done by hand, after a dew, so that the flowers are moist. The flower is then removed. The three scarlet stigmas must be delicately separated from the flower by pinching with a fingernail, just where they join the style.

Then the stigmas are gathered together, and dried to retain the full flavour. Drying methods world wide are different (in the sun in Iran; in an oven or on a silk screen over a charcoal braisier in other places) but the result is the same – the stigmas lose four fifths of their volume. 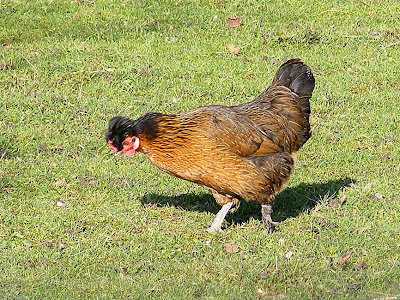 Cultivated from the Middle Ages in France, particularly in the Gâtinais, Rouerge, Quercy, Lot and Touraine, its culture and trade reached its peak in the 19th century. The kings of France published edicts to protect the growing and selling of saffron, which was a source of revenue through taxes for them. In Touraine, a large fair was held in Preuilly-sur-Claise on Saint Luc's Day (17 February). It is referred to at the beginning of the 17th century – 'One can buy there, on that day, quantities of saffron, outside the walls of the town.'

So it was that Paul Mériguet, saffron and truffle enthusiast, who, on the friendly advice of Monsieur and Madame Monnier and Gisèle and Jacques Manreza, started growing saffron in his garden. With the village fête committee in 1999, he resurrected two fairs: one on the 3rd Saturday of February (the closest date to Saint Luc's Day, which is no longer celebrated today) for the sale of stigmas, and the second, the first Saturday in July for the sale of bulbs.