Anyone who has been to Chambray lès Tours looking at bathrooms (or indeed anyone who leaves the A10 in Tours to drive to Preuilly) will have noticed this construction in the middle of the road opposite Conforama. I realised immediately (mainly because of my avid readership of Hornblower books as a boy) that it was a semaphore/telegraph.

When we were looking at bathrooms yesterday we happened to do a U turn around the base of the telegraph, and I noticed it had a sign explaining what it was: "Telegraph Cl. Chappe". 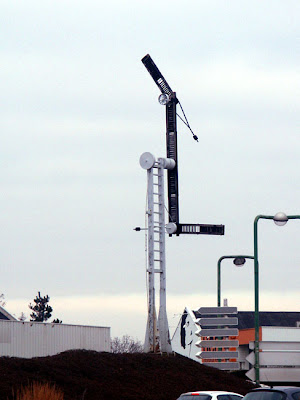 Claude Chappe was born in Sarthe (not a million miles away from Tours, coincidentally) in 1763, and with his brother Ignatius worked on a number of different schemes for transmitting messages long distance. This telegraph shown here was the third such scheme and was invented in 1793. By 1852 the telegraph system covered most of the main cities in France, and was capable of sending a message vast distances in a very short time - Lille to Paris, for instance took 9 minutes under optimum conditions.

This semaphore seems to be in position 34: there is more about the code here.

>>By 1852 the telegraph system covered most of the main cities in France, and was capable of sending a message vast distances in a very short time - Lille to Paris, for instance took 9 minutes under optimum conditions.<<

Interesting, because by 1852 Morse telegraphy had been around for a decade or so. In 1851 the Morse code, had they used it, could have sent a message from Lille to Paris in seconds.

Berrowne, here is what Wikipedia says about the Morse code: [...] Originally created for Samuel F. B. Morse's electric telegraph in the early 1840s, Morse code was also extensively used for early radio communication beginning in the 1890s. [...}

I doubt the electric grid in France in 1852, if any, would have let people use Morse code to any effect. Whereas Chappe sémapahore/telegraph was visual and didn't need any electrical power, and antedated Morse by 50 years, BTW.

Of course Morse code could be used visually also, but not as extensively and effectively as Chappe's telegraph would.

If you want to see another Chappe telegraph, there is one on the top of the dungeon of Montabazon in the Loire Valley and one near the Château du Haut Barr near Saverne in the Alsace. I may do a post about them one of these days :)

Martine:
I am interested in the one at Montbazon, as we drove past it last night. I have always assumed it was a statue of the virgin and my reading confirms this.

However, it could be a cunning disguise, and at the flick of a switch she drops the baby and starts waving flags :)

Simon, LOL!!!
No, don't worry, it isn't the Virgin who's doing all the signaling. You actually have to walk up to the dungeon (and pay the entrance fee, of course) and then you'll see it. It's on the other side of the dungeon, the part that isn't visible from the road. There's a large plaque explaining the history and functioning of the telegraph. It's very interesting and surely worth a visit. If you don't believe me, I can mail you a photo of the plaque ! Martine

Simon,
I see you retained a wicked Aussie sense of humour. Goodonya!!
Leon

Whew, Martine, thanks for clearing that up. I only remember the awkwardly placed statue at Montbazon, so I was beginning to wonder about your state of mind, that you saw the Virgin Mary as a telegraph, till you explained.

Carolyn, lol! Apart from the occasional stress attack at work, my mind is as fit as that of that of a twenty year old!

Great to see there are some of these still surviving - thanks for posting a picture. I found your page via Google after trying to find an existing Telegraph in Paris, I'm over next weekend and have just read about Chappe this morning.

James Gleick's 'The Information' gives a great history of the system including the "sniffy" response to Moorse when he tried to trial his electrical system in 1838. The French were heavily invested in the optical system by this point of course, they were also concerned that wires could be cut and that their system, despite being visual for all to intercept, was more secure.

Jules Guyot, a physician and scientist assigned to assess the technology, sniffed, "What can one expect of a few wretched wires?" (p136)

Mu - I am not sure if there are any in situ in Paris - there are a couple in museums, and I sort of assumed that "Telegraph" in the 19th/20th would have one, but I am not so sure now