The Abbaye of SuperU

Like supermarkets all over the world, SuperU has its "own brand" produce. The really cheap stuff is called "bien vu", but they also have a higher quality line which just displays the "U" trademark.

When we buy beer (which is rarely these days) we tend to buy either mass produced stuff (for people like visiting uncles) or Belgian beer (for people like Susan and I). For a while now, the Belgian beer we have been drinking is Leffe, which is brewed by the monks of the Abbaye de Leffe. It's a strong brew - 9°, so not to be taken lightly. 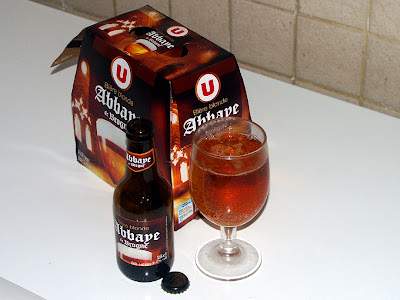 Imagine our surprise then, when we discovered that SuperU hav their own brand Abbaye Beer. It isn't as strong (only 6.2°) or as dark as Leffe, but it isn't bad at all. It is brewed at the Abbaye de Brogne in Belgium.

I suspect that only in my fevered imagination
does the Abbaye de Brogne look like this. 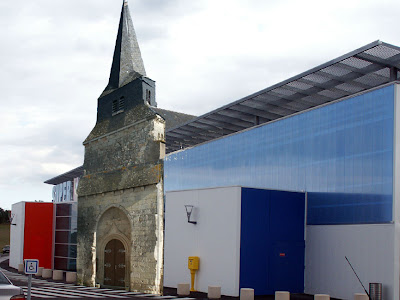 And now the weather: The snow has just about gone now and we eventually had our road salted - by hand, yesterday afternoon. Last Thursday the commune tried to scrape the snow off with a tractor, but he only got just past our courtyard before giving up, leaving a wall of snow 18 inches high across the road.

It was really cold last night, so all the melting snow has frozen into weird and wonderful shapes. We have a mini lava-flow sculpture in ice at the foot of our drainpipes, and the van parked in our neighbour's driveway has amazing icicles hanging off its bumper.

We are expecting warmer weather for the next couple of days, but I wouldn't be surprised if winter has a sting in its tail.

Simon,
Salted roads - the scurge of motor cars, something as you know that we don't have in Oz, but the dreaded rust still finds it's way into our classic cars.
I hope that Celestine is all rugged up until the salt is no longer needed on your roads.
Leon

We bought ourselves a power washer the other day - for the purpose of spraying Célestine's undercarriage. She hasn't been out on salted roads, but will get treatment as soon as I am sure the water won't just freeze on her.

Salt in Australian cars happens when you go surfing. I can remember all my car fanatic mates always sprayed their cars after going to the coast

Thib:
I didn't think anyone would notice ;¬)

Leffe is the drink of choice for many bikers. Gets you plastered quicker than most other beers and ensures nobody wants to share your tent at the rally !!

We love that in France, Chimay comes in smaller bottles than the US, just the right size to accompany a meal. Now I'm looking forward to a taste test comparing Chimay, Abbaye, and Leffe. When that will happen I don't know, but it's going in the encyclopedia for a future trip.

Word verification is "joblests"--someone must be retiring.

Hmmm, I thought. This sounds/smells fishy. I've never heard of the Abbaye de Brogne (although I live in Belgium). So I googled it, and found that the Abbaye which was founded at the end of the 10th century today makes .... wine!

I'm sorry to say so, but I even have my doubts about the beer actually being brewed in Belgium. I think the name is just a marketing gimmick. Have you checked the bar code? If it starts with a 5, it is Belgian. If not ... well... :))

But who I am to judge. As long as you enjoy it, there is nothing wrong with it.

P.S. Here's a link to the Abbey's website: http://www.brogne.eu/vin.php

Simon... Ladybird is right about the Abbeye bit. Your Super-U beer factory with abbey additions is closer to the truth than you think. Westmalle and Westvleteren are still brewed at their respective abbeys... but Chimay [although the brewing is overseen by a monk from the abbey] is now brewed at a factory down the road. All these are Trappist beers, the true Abbey beers. [Real abbey beers are brewed at Achel, Chimay, Koningshoeven (the Netherlands - brews La Trappe), Orval, Rochefort, Westmalle, and Westvleteren.] Beers called Abbey are either [a] branded with the name of a defunct or fictitious abbey by a commercial brewer; or
[b] given a vaguely monastic branding, without mentioning a specific monastery, by a commercial brewer. Lidl do one that is really only good for cooking with.
I'm back over with Stuart our 2CV friend next week [to lay the floor] so you and Susan must come over and have a swift one. [The LeClerc at Perruson had some nicely priced bottles of Orval last week... please don't buy them all!]

Martine: yes you are probably right - the bar code starts with a 3. However, it really isn't a bad drop for every day use. Of course, the best beer can only be had if you are actually in Belgium, and is in a different league altogether.

Tim: We'd be happy to come over and sink a cold one next week :-)