When we flew back from Australia on Air France / Air Korea codeshare in December I took the opportunity to watch a charming documentary in French about moles. The next morning I made notes to ensure I remembered all the fascinating information in the documentary.

Me writing notes on moles in a Paris café 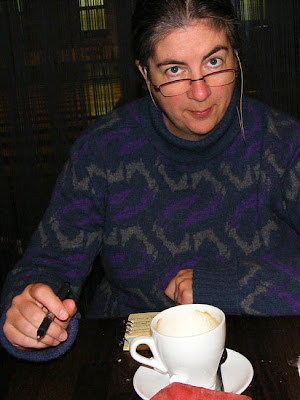 We get moles in Preuilly, but I have never seen a live wild mole, only a dead one that had been killed by a fox. But evidence of moles is easy to spot and all around. Moles make molehills – mounds of freshly excavated dirt in groups and rows, telling you that the mole was active just there last night. 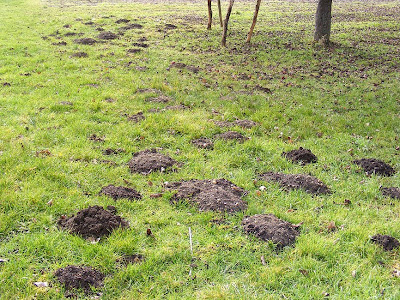 Mole in French is taupe (pronounced 'tohp') and their scientific name is Talpa europaea. A molehill in French is a taupinière. Moles are about 10-15cm long and weigh about 100g. They have cylindrical bodies and a lovely black pelt; eyes and ears are miniscule, but the feet have been transformed into shovels! Surprisingly, they can swim quite well, although the large front paws do seem to go round like out of control paddles on a waterwheel. Gardeners find them quite frustrating as they mess up lawns and undermine plants. If you can live with this though they do more good than harm in the garden, aerating the soil and eating the larvae of insect pests. They are notoriously difficult to discourage from the garden or to kill. If gas is pumped down a molehill the mole simply turns away from the gas and blocks the tunnel with its fat little rump.

Moles are common almost everywhere in France, but they are seldom seen because they spend almost their entire lives in their underground gallery system of tunnels, hunting worms and grubs. They are adapted to the low oxygen in the tunnels in a similar way to high altitude animals like llamas. Even so, the air circulation in the tunnel systems is measurable and is considered remarkable by the researchers who undertook the study.

Moles come to the surface to collect leaves and grass to line their nests, and are very vulnerable when they do so, mainly from foxes and cats. In dry summers their main prey, earthworms, go dormant (a condition known as estivation - the summer equivalent of hibernation). The moles are then obliged to surface and chase insects. These outings are exclusively nocturnal, but if you are in the right place at the right time, with a torch, you might just see a live mole bustling across your lawn.

Fascinating - thank you for answering all the questions I ever had about moles in one go !

The only time I ever saw one (dead of course) I was surprised how small it was and the relative size of its feet.

I was able to watch a mole digging at my feet for several minutes last year (must have been a very stupid mole) I learnt that they have a network of tunnels, just under the surface are feeding runs and approx 90cm deeper for living quarters and that deep tunnel is why they are so hard to erradicate.
Torpedo, how did that come about?

My back garden currently looks like your photograph. Arrrgh! But I know I have no recourse but to collect the dirt for my potager and let the little buggers be.

Anon: You lucky thing! You must have that knack of being quiet and still so wildlife is not spooked.

Nice thought :-), but I doubt 'taupe' and 'torpedo' are connected. 'Taupe' is a reference to moles' colour not their shape.

"Wind in the Willows"--Ratty and Mole. Perhaps more adorable on the page than in person. I have seen live moles, and they're small and soft and furry.

And possibly better appreciated if one does not have a lawn full of their tunnels.

Apparently moles feed at about the same time each day. I had a little pink nose and sharp teeth at my feet one day, when I tried out this theory. Tried using rose stems, beer bottles (neck sticking out of the mounds to make a "whistle"), 3 different designs of metal traps.