By now, anyone who reads a French blog should have realised that it's turned cold again. A couple of weeks ago it was uncommonly mild (temperatures in the mid teens) and we were looking forward to an early spring - somewhat misguidedly, it turns out. 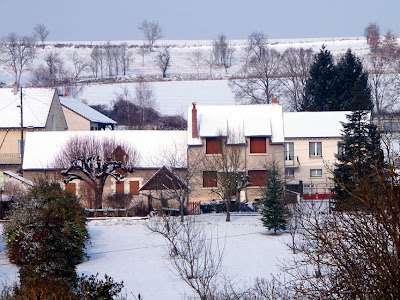 On Wednesday we had snow flurries, and Thursday morning it snowed properly in between the poubelle men (5.00am) and us getting out of bed (later). This snow has hung around, and the weather has turned seriously cold, causing an interesting effect. In our driveway, anywhere that I stood on the snow I compressed it - and that has turned into ice. In some places the snow has cleared (or been cleared), leaving just the icy footprints. These are now incredibly slippery, so anyone following in my footsteps: be warned! 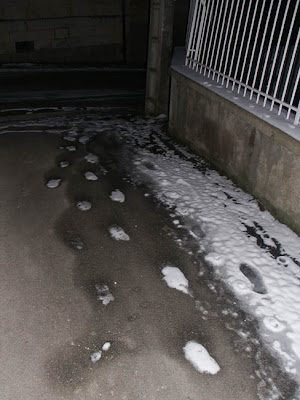 Friday we went shopping - the Thursday marché in town was somewhat curtailed by the snow, and our street hadn't been cleared (it still hasn't), but by Friday we needed to shop. On our return we waited in our very narrow street while someone unloaded their car, parked outside their front door. There was no way I could reverse back up the street - I had stopped on a big sheet of ice. In the end, Susan had to get out the car and ask him to move - because although I had the brakes full on our car was sliding slowly towards his!

That means that for the past few days we have been inside, working on both our plans for the house and our business plan. We have been burning a lot of firewood - and one or two other things besides. 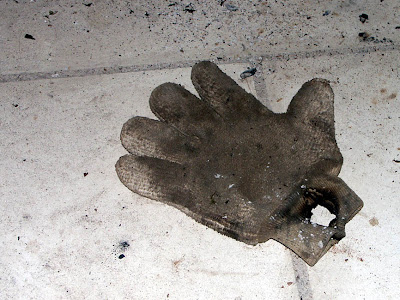 Susan asked me what it was she could smell burning. I had no idea - I could smell something nasty burning too - but I couldn't see any embers on the carpet (usual suspect). It wasnt until I went to put on my fireproof glove that the mystery was solved.

Yes, brrrrr! Are we sick of it yet? You know we are.

Forecasts say the temps might get up to 5ºC/40ºF by Wednesday. A veritable heat wave.

Bon courage, as they say.

If Bengt & Suzanne up near Stockholm have been attending to the blog recently they will be unimpressed by our concern with low temperatures, as their daytime figures are as far below the zero mark as ours (Southern UK & Touraine) are above it.

The good thing about weather grousing is that there is always someone worse off.

We will be mightily pleased even so if the forecast sun and rise in daytime temp. happens for Touraine by next Thursday.

Bengt and Suzanne were here last week - it was looking decidedly dodgy if they were going to be making it back up north, what with the delay in gritting the roads.

Ken. We have rain and cold forecast for Wednesday. If you believe anything the meteo says, that is

The hole in your glove looks like the result of some gun battle in the wild west.

We have enjoyed temps of 5 degrees C and sunshine today! But it would be foolish to think we are out of the woods yet.

My mother on the coast of North Carolina, where the weather is much milder than in Touraine, reported today that they got 8 inches on snow on Saturday. Of course it's probably all melted by now.

As for weather forecasts, of course I am a believer.

Thanks for the concern, J&J and apologies to S&S for not coming by to say goodbye. At 10.30 am on thursday a snowplough passed our steet and cleared it from snow. 30 min later there was another clearing by two men with a airblower (don`t know the proper name in english) and blow more snow away. After him a man spreading salt to prevent freezing. Thats more efficient than were we live in Sweden. Here we usually have to wait up to 8 hours before they cleared the roads. And we did catch the bus to Tours. We gave them a call same morning to make sure the bus were running. When arriving in Tours it was freezing cold with strong nothern winds. But hardly no snow at all. Now home in 0.5 m of snow but quit mild -4 daytime and down to -12 or below at nights. Bye