It was a bit cool yesterday

Not those brain freezing, sub-zero temperatures we had in early January, but on and off sleet, a bit of a breeze, and the sun coming out almost long enough for a bloke to get his boots on and get outside. As it was, the sun would come out, I would put my boots on, and get outside just in time for the next squall of rainy sleety blowy stuff to arrive.

You don't need more photos of bad weather: This is the
garden of the Hôtel de La Rallière, Preuilly's second chateau. 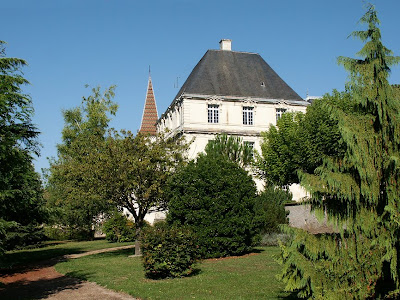 Because it was wet I felt disinclined to finish the task I had set myself: screwing the garage's brick wall to its new frame. The job is half completed, but I now have to put in the ties on the upper section of brick. This means putting up my échafaudage and using the electric destroyer to chase out the mortar between the bricks where the tie rods are going. This has to be done from outside, drilling in. Talking of chasing out mortar, I have learned something last week - bricks don't take to being hammer drilled with an SDS drill - they split. Rather, I have been using the SDS set just to drill for both chasing out the mortar and drilling the holes in the bricks, and it's worked fine.

The Hôtel de La Rallière was built in 1649, but never
properly completed. Until recently it was used as the
retirement home. These photos are from summer. 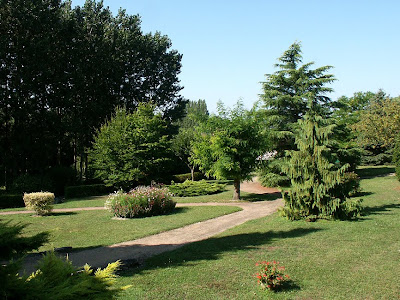 So instead, I tried to make our new web page (see right) work. It all looks good, but I can't get the contact page to work. After a lot of plumbing talk I decided that the problem lies with the host and not my sketchy programming skills. Therefore, it will have to wait until next week when the hosting service are back at work after the weekend.

All this techie talk - anyone would think I knew what I was on about...

Simon, Congratulations on your new website ... It looks very inviting. I wish you a lot of success with this news venture!

Yes, I had a look at your new website. It sounds great. I had the same idea years and years ago, but didn't give it a second thought for several different reasons. I would have taken choice English speaking tourists, two or three at a time, through the French countryside away from the well trodden paths. As you say, there are so many lovely things to see all over the place that almost nobody knows anything about! Good luck with the new endeavour and long life to Célestine! LOL

Nice new Web page. A typo in one para:"contact us us" in"Please do not hesitate to contact us us if you have any questions or special requirements"

Lovely new website. Suggestion for a small addition/correction, however, in the section on Celestine:
"front wheel drive monocoque cars it can be said"

It will read better with a comma between "cars" and "it."