I wrote about Alex demolishing and rebuilding a block side wall of the garage that was in immediate danger of collapsing (which it proceeded to do while he was demolishing something else). What I didn't mention was the front brick wall of the garage, and there is a good reason for that: we didn't know there was anything wrong with it. 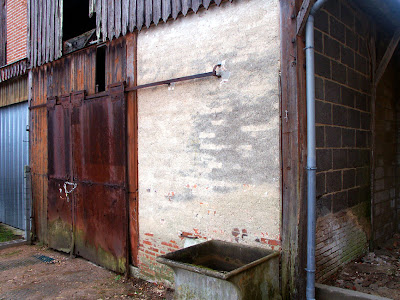 Last year I wrote about our quest for an extendable clothesline of the sort you buy in Australia. When we were in Australia last year I managed to buy one that fitted into my suitcase (more by luck than management) and we brought it home. When we were deciding on where to place the line (we had two options) I made a startling discovery.

The front wall of our garage is brick. Our preferred option for mounting the clothesline is to bolt it to the brickwork above the old laundry tub, and to have the line extend east-west across the garden. When testing the brick I pushed against it - and it moved!

The bricks are just an infill curtain wall, not tied into the frame of the garage: literally, they are just a single thickness of bricks stacked up on top of each other with a small amount of mortar holding them together. This is a worry, because not only would the wall be unsuitable for mounting an extending line on, but the bricks looked like they could collapse, bringing down the sliding garage door and endangering Célestine in the process.

We could have taken down the bricks and rebuilt the wall properly with parpaing, tying the new blockwork into the wooden frame, but this would have meant having to deal with the garage door and its mounting, which could have been quite tricky as the garage door weighs an awful lot.

Instead, we had Alex build a wooden frame, to which we will tie the brickwork. The frame is in place, and my next task is to find some metal ties we can push through the mortar joints in the brickwork and screw into place. 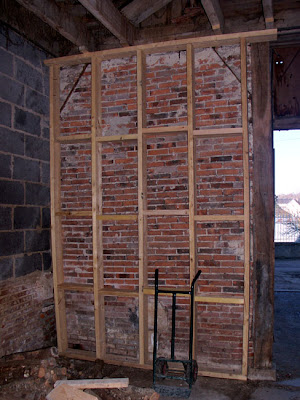 At the moment I am having trouble finding the metal tie strips. We can buy some which are too short to push through the wall and screw to the frame, which is my preferred option. I am sure I have seen something like a perforated metal strip that comes in a big roll and you cut to length, but I have no idea of the English term for it - and even less of the French!! 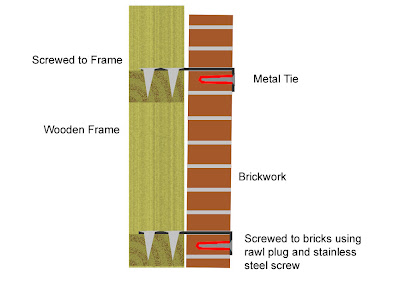 Next week I will venture to some of the larger Brico stores and have a rummage: I also need to buy a steel post for mounting the other end of the line onto.


That's all the help I can give.

Excellent. That is exactly what I am after. At least I can now take the picture in to the bricos and show them!!

There is very little load on the brick panel in the backwards and forward sense, with the exception of the gate mounting (and that load will be mostly vertical), so the fixings of brick to SW do not have to be particularly strong. A few angle plates fixed internally would probably suffice, rather than piercing the wall and rendering, with evidence of the repair on the exterior. One might well, on the other hand, try to attach the steel door mountings directly to your beautiful new sub-frame, but this is probably unnecessary once the brick panel is stabilised. MS angle plates are easy to find in any builders merchant and your will need some normal masonry anchors.
Word verification is 'lingo' - very appropriate!

Anon. Fixing on the inside was our opriginal choice, but the wall has what could be politely described as a camber - outwards. My plan is to put the ties between bricks and rapidcement them into place. The render should be thich enough outside to hide any evidence. The problems with the garage door fixings is they are welded onto the rail the door hangs off and the whole ensemble is rusted.

Dorothy. We spit in the eye of tough :¬)

Simon,
Have you found the French equiv of "strapping" yet?
I'm back in a couple of weeks... could get you some from Screwfix if needed... we've a walk in store here in Leeds,
Tim

Tim. I did thanks - at PointP in Chatellerault. I am about halfway done, but the snow has started again, and no way am I climbing the scaffolding with the electric destryer while its snowing.