One of the mysteries of France, and something I am sure puts off a lot of visitors to the country from travelling by train, is the apparent complexity of the system.

There are a couple of little tricks that make using the system easier, if not totally simple:

To find a train don't use the SNCF (French railways) site. For years now I have been using the German railways (DB) site because it is more forgiving: it finds stations if you don't know the exact name: for instance typing 'Charles de Galle' into a destination box will bring up both stations at Paris' busiest airport, the SNCF site may or may not according as to how well disposed towards you it is feeling. The DB site also gives you some bus and RER connections whereas the SNCF site doesn't.

A TGV at speed in the depths of winter.
300km/h all day every day. Amazing 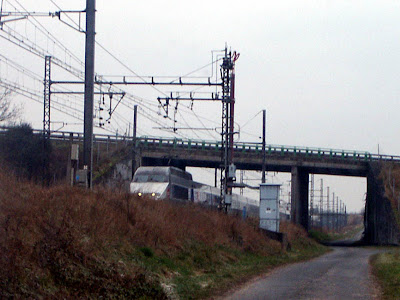 Once I have found the train I want and noted its timings, I go to the SNCF site to book my ticket. This I do in French saying I am in France: doing that stops the site changing to a RailEurope site near you. (If you're in the USA, RailEurope doesn't have the two cheapest types of ticket, and if in the UK it doesn't do PREMS, which are the cheapest of all). If you buys a PREMS ticket you can print them at home (don't forget to carry photo ID that matches the name on the ticket when you're on the train). 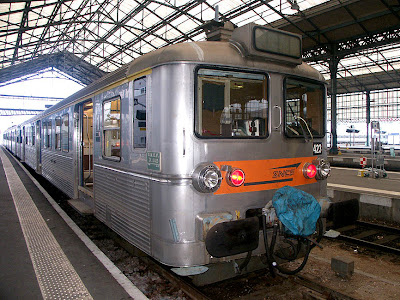 If you buy any other sort of ticket you take your email receipt and the credit card you used to buy the tickets (a replacement won't do, it has to be the same card) into a station or ticket agency and collect your card tickets. You can do that either at a window or a machine.

I had fun last time we went to Paris: the machines you get your ticket printed at are touch-screen computers that react to heat when you touch them. Susan sent me off to collect the tickets (with credit card in hand, naturally) while she ordered coffee at the station café - and I was gone ages. 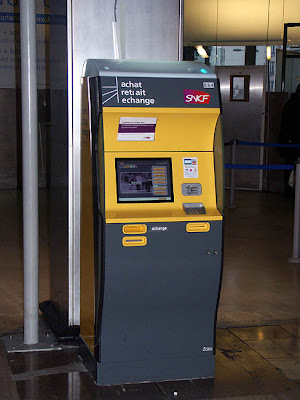 The reason? My fingers were cold, so in between every press of the screen I was having to breath on them and rub them up and down my coat to warn them up. Trouble is, it was taking so long to warm my fingers up that the machine would keep timing out and going to the start page again. I finally managed it by rubbing the fingers of one hand while touching the screen with the fingers of the other, then changing hands once the computer realised I had touched the screen and presented another screen to be touched.

Anyhow: normally you touch to say you're collecting tickets and that you want them printed immediately, then you put your credit card into the machine, enter your PIN and voila - the tickets are printed.

Once you print the tickets, and just before you board the train, you have to stick them in the composter. Not what you think, this machine stamps the date, time and station name on the ticket. 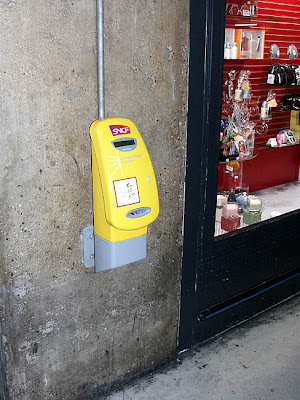 I am not sure why, but it is an offence to not compost your tickets before you board. I assume this is a hangover from services which aren't all booked places, but you still have to do it, even on the TGV.

We enjoy travelling by train - even with the ultra slow bus service and a 50 minute wait in Tours, it is faster catching the bus/TGV combo from Preuilly to Paris than driving it. When you get Prems, it isn't any more expensive for the two of us either: €17 per person each way.

There are a lot of trains (not TGVs!) in France where you don't need to book a seat. And when you buy a ticket, it is valid for 2 months... which means that if you don't compost it, you can re-use it every day (and even several times a day...) during these 2 months !
This is why it is compulsory to compost ;-)

However, I know that the SNCF is thinking to abandon this "compostage" for seat booked tickets (at least for frequent travellers)

If you have a car, it s faster to catch the train at the Chatellerault's station .
Alain

I don't understand why people have so much trouble with the SNCF web site (http://www.voyages-sncf.com/). It's a mystery to me. I've never tried the German site. Thib has explained the compostage situation -- if you know how French people love to cheat on the rules, you understand why compostage has become ingrained in the system.

I admire your ability to find such cheap TGV tickets from Tours to Paris. I've never done that well.

Once you've reserved any SNCF ticket, from wherever to wherever, you can go pick it up in any train station in France. Of course, if you have a mailing address in France, you just have the ticket mailed to you. It's free.

Loire Valley Time Travel--well done! This ought to entice people to see back roads France. First-timers want to tick off the major chateau boxes, but they can do that and see the gorgeous countryside at the same time, while riding in style.