The Touraine is riddled with underground passages and quarries. Even the shortest drive will take you past at least one, with its entrance temptingly open to the road. Many of them are seemingly empty and some of them are complex systems of interlinking chambers and passageways going deep into hillsides and cliffs. 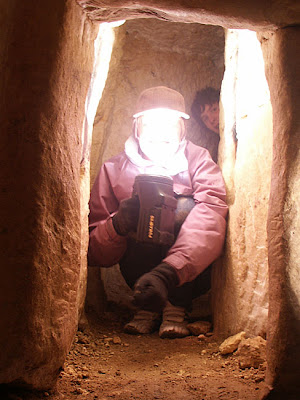 At the Château de la Celle-Guenand, there is a network of passages under the main building, like a rabbit warren, with multiple entrances / exits in the village, as well as within the château and grounds. They date from medieval times and were an additional means of protecting the occupants, allowing them to come and go in secret. Nowadays, many of the tunnels are blocked up and a lot of them are too small for comfortable exploration. Steve Palluel, who with his partner, owns the château and runs it as an event venue and holiday accommodation, was kind enough to offer a private tour of the tunnels and so while we had two 19 year old boys staying with us, we thought it would be a good opportunity to take him up on the offer. We also got to see the caves (also man made) at the back of the château, which, somewhat to Steve's alarm, run underneath the neighbours' gardens. He worries a bit about them collapsing, but like many old structures, they've been looking parlous for decades without any real change.

I was interested to note that there are no signs (eg guano) of bats roosting in the caves at the château. At this time of year, many bats switch from their summer roosts in trees and buildings and move in to a cave for the winter. 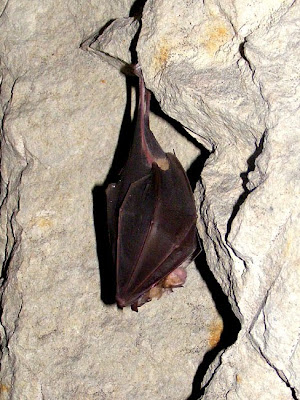 Bats can be very vulnerable during their winter hibernation if they choose a cave that is easily accessible, and if you want to explore the souterrain, you must remember that all bat species are totally protected in France. It is an offence to disturb hibernating bats, because to do so reduces their survival chances. If they are roused from their torpor, they use vital energy, which can result in them not having the reserves to get through the winter. Always bear in mind that you may not be the only curious person poking around in a cave over the course of a winter, and once you notice that a cave is being used by bats, you should exit quickly and quietly, without shining your torch around too much.

The troglodyte complex at Gatineau below. Vienne Nature has posted a warning about disturbing bats here. I assume there are Greater Horseshoe Bats in residence, as I found one dead on the roadside 10 days ago. 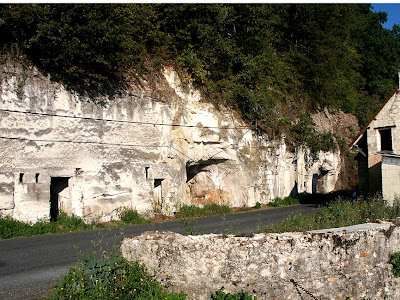 In the neighbouring départements of Vienne (86) and Indre (36) you will often come across notices at cave entrances, reminding you that bats are protected. This is an indication that the site is a known bat roost, and you should not enter. Our département, Indre et Loire (37), is much less likely to post warning notices, and I know of one cave, very easy to access, which has at least four species of bats currently hibernating in it. Fortunately, there is no evidence that they are in danger of deliberate disturbance.

Email ThisBlogThis!Share to TwitterShare to FacebookShare to Pinterest
Labels: nature and wildlife, Pictures of Chateaux, Towns and Villages near Preuilly, Winter

Nick and I were lucky enough to be shown round the souterrain at La Celle-Guenand by its previous owner last autumn. I must admit I felt extremely uncomfortable in the narrow dark passages. The owner was keen to tell us all sorts of gruesome stories of how people were trapped and murdered down there over the centuries.
I thought it was a beautiful château and it was for sale at the time. I actually bought a lottery ticket when we came home. Well, you never know, we could have been the new owners now...........

Jean: Steve says he has over 100 louvered window shutters to paint.

Simon, I was planning on winning enough to pay someone to paint them for me. And everything else !!