The Collège Gaston Defferre in Preuilly-sur-Claise runs French language evening classes for adults. They are free, being funded by our Région, Centre.

I popped over to the Collège administration office the other day to get the details of when the classes are held and how to register. They told me that the course is 4 months and lessons are once a week from 19.00 - 21.00, and will start in January or February. Advertisements will be posted in local supermarkets and bakers later in the year, but in the meantime, if you are interested, they encourage you to put your name down and they will get in touch with you closer to the time. The course will only go ahead if they have 10-12 people register. 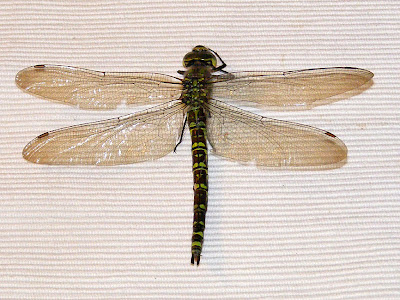 They expect to get a number of students who speak no French at all, but the classes are presumably flexible enough to cope with a variety of abilities. I conducted my enquiries entirely in French, and explained why I had arrived carefully cradling a dead dragonfly* in one hand. I was complimented on my level of French, but not discouraged from putting my name down for the classes. I did mention that what I really needed was the language skills to deal with Bâtiment de France architects, but when I said that the administrator laughed and said that even for French people that is a challenge.

*I found it in the street on the way there, and picked it up in order to take it home and photograph.
Posted by Susan at 09:00

Susan, good luck finding anyone who knows the vocabulary to deal with that building department! But I'm sure the classes will be fun, albeit a little under your abilities.
Nice dragon fly!

I have found that even though a class might be a bit too basic, there is always something to learn. A beginners class is good for brushing up on grammar and things I have forgotten in trying to extend my vocabulary.
Not that my French is good - I just get by a little better than I used to, that's all.!

As somebody who has spent 45 years of his life studying French, I have to recommend taking a language class whenever possible. There is always something to learn -- and I mean for 45 years or longer.