They may be pronounced the same, but we were in no danger of mistaking one for the other at the Fête d'Automne yesterday in Le Petit Pressigny. The bacon (along with all the other food on offer) was excellent, as was the art that forms the other half of the festival.
Pressing apples for juice. We need this
man to visit our orchard next year 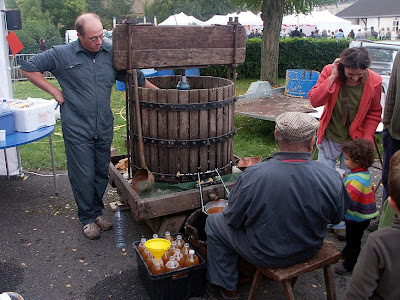 This is a great concept, whereby people in the village with suitable caves, terraces, barns and decks offer their premises as a display space for participating artists. To view the works and mini exhibitions, you pick up a map at the welcome stand and head off around the village. A great way to get a look at what is behind the garden wall. We were especially pleased that 'Miss Haversham's place' was open, showing the work of Treb, who makes amusing small scupltures in iron. In the salle de fête, Alain Plouvier was exhibiting his African influenced mixed media paintings, reminiscent of tribal textiles. If you want to see these works, he's having an exhibition at Galerie Sanaga in Tours from next week. I also liked the peasticks wrapped in clingfilm decorating the lavoir, the drawings made by scratching through black paint on glass, and I was very pleased to talk to the man who was combining painting and various photographic techniques including cyanotype (which is a medium I have worked in many years ago). 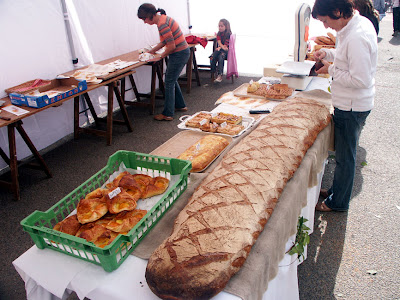 The food vendors mostly set up stalls in the carpark in front of the church, and there was some very interesting produce available. Someone had an apple press and was producing jus des pommes on the spot. We were told to keep our bottle in the fridge with the lid unscrewed a little, because after a few days it will have produced enough gas through fermentation to explode. One of the local bakers had made several enormous loaves of bread. She said they were each 12-15kg of dough, baked for 2 hours and making a loaf 2m long. We also bought half a brébis (ewe's milk) cheese, aged for 3 months and made in La Nouaille (situated in the neighbouring region of Limousin). 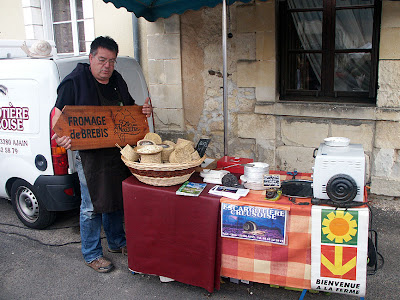 We could have had lunch of andouillette and frites, or the menu offered at the salle de fête of salade tourangelle, ham in garlic sauce, cheese platter and apple dumpling, or lunch at the Michelin starred La Promenade or le Bon Coin workers' café across the road. Instead we opted to go up the hill to a house with an old bread oven, which they had fired up and were cooking homemade pizzas. The topping was tomato puree (homemade), cheese and a thick slice of bacon. One of the best pizzas I've ever had! 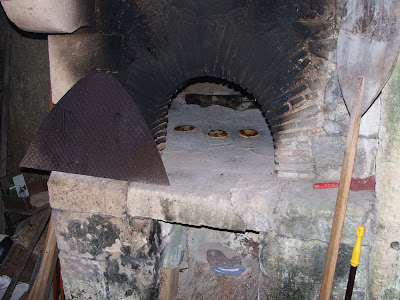 It was great to see how popular this event was - deservedly so in our opinion. The quality of both the art and the 'lard' was a cut above most village fêtes I've been to. The art was not the usual polite watercolours and garish oils, but a real mix of creative, interesting work; and it was good to see so many really knowledgeable, passionate food producers.

Email ThisBlogThis!Share to TwitterShare to FacebookShare to Pinterest
Labels: Events, Food and Drink, Markets, Towns and Villages near Preuilly

The works by Alain Plouvier are quite remarkable. I'll do some more reading about him. Thanks for sharing your fete.

I guess "Lard et l'art" is a clever way of saying "food and art" festival. Looks like it was fun.

That loaf of bread is quite a 'whopper'!

Hi Susan,
I've been reading your blog since the summer, but this is my first reply. I was particularly interested in this post because we are in the process of buying a house in Le Petit Pressigny, and love this kind of fete. Perhaps we will be able to 'see it for ourselves' in a few years time when we retire and can spend more time in France.
Keep up the good work!
Best Wishes
Gaynor

Gaynor: always nice to have people de-lurk :-) Perhaps we will see you at the fête next year ?