Preuilly has a market twice a week, on Thursday and Saturday mornings. They get underway from about 09.45 and finish by noon. Different stalls come on Thursdays to those who come on Saturdays. 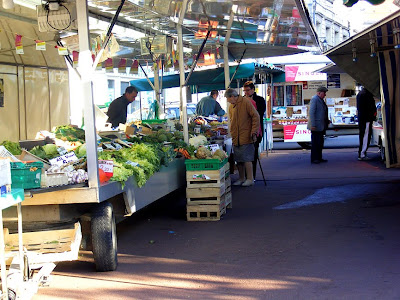 On Thursdays we get rabbit and chicken products; fish; goats' cheese, eggs and honey; fruit and vegetables; meat; plants; fruit from a local orchard and vegetables from the potager next to ours. In addition there is sometimes another fruit and veg stall, organic produce and the sewing machine and vaccuum cleaner van. On Saturdays we get a different fruit and veg stall and a different local market gardener (who is by far the most popular veg supplier); there is also dairy products; oysters; clothing and sometimes wine. 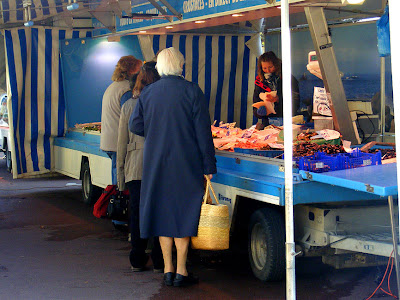 The market isn't just a place you go to stock up on fresh local food though. It's where you go to meet friends and network. I once went to the market and bought nothing, because I chatted and caught up with so many people I ran out of time.

My progress through the market went something like this: ran into Jill and John and caught up on their news [English spoken]; Bengt and Suzanne arrived to catch the bus to Tours, so we all chatted till the bus came and I said 'hi' to Felix who was also waiting for the bus [mostly English]; arranged with John and Alice to pick up a plant from their place over near Boussay [mixture of French and English in equal quantities]; Bernard de la Motte spotted me and we discussed how best to deal with Bâtiment de France - I had emailed him for advice and he had simply waited until he saw me at the market to respond [French]; had a conversation with Louisa about remote working and discussed how we might help a mutual friend about whom we are concerned [English - well, American in her case...]; spoke to our neighbour Guy L about the petition to save the post office [French]; bumped into another neighbour, Sylvie, at the baker's and we walked home together, with me practicing 'roue' and her practicing 'Farrow and Ball'*, in between hooting with laughter like schoolgirls and talking to Valéry, who was up on a scaffold repairing his roof [French].

*Farrow and Ball is a British paint company specialising in high quality paints which are particularly suitable for historic buildings. They have a distributer in La Roche-Posay, and Sylvie is in the process of decorating her house.
Posted by Susan at 09:00

Email ThisBlogThis!Share to TwitterShare to FacebookShare to Pinterest
Labels: Markets, Pictures of Preuilly

If it's a man who was up on the scaffolding, his name is probably Valéry, as in Valéry Giscard-d'Estaing.

Sound like a nice market and a good networking venue.

do you that this place was calling before " marché aux porcs " and planting with many trees , now it's place for 'supermaket ' its really a shame ....

Susan, what a perfect little cameo of village life. Beats battling your way around Tescos where people barge into you all the time, avoiding eye contact.

Ken: Yes Valéry on the scaffold is definitely a bloke. Since we also have a female neighbour called Valérie, I'd better correct the spelling to prevent confusion :-) And Louisa did assume I would know who Julia Child was ... :-)

William: I assumed the old Marché aux Porcs was in the street of that name, not on Place des Halles, where the market is today - is this assumption wrong? I know Place des Halles used to be a covered market until it burnt down (I think sometime in the mid-19thC).

Jean: And in Preuilly market place you can benefit from almost everyone you speak to correcting your French :-)) I never had that happen in Tesco :-)

Susan - not many people in our Tescos speak French they mostly speak (very) common English of the f.. and b.. kind. !! LOL