M. Douady arrived yesterday morning at 9 o'clock to start work on the chimney.

Once again we have been impressed with how workmen here arrive and just get on with the job. We gave them a cup of coffee, and then they worked until midday. After lunch they worked until 5.30, when M. Douady joined us for an apéro.

I was sort of surprised to see that the old fireplace (brown marble) was actually cement - painted brown marble. I knew it couldn't have been real marble - it would have taken an enormous block of stone to carve the deep releifs out of - so I don't know what I was expecting to see.

The back of the old fireplace 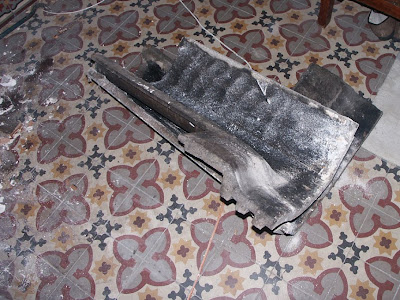 One of the things M. Douady did yesterday was remove the terracotta bricks from above the old mantlepiece, exposing some stonework we didnt realise we had. We have decided to leave the stone on the chimney breast exposed once our new fireplace is installed. It is on an internal wall, so there is no need to insulate, and the tuffeau of the fireplace should match the tuffeau of the chimney breast nicely - after it has been well cleaned, that is.

Work on the chimney (and fitting the fireplace) can't happen too quickly - it was very cold last night, and is expected to be down almost to freezing by the end of the week.

Hi Simon, M. Douady should have used Bahco tools ... the sawing would have cost him less effort ;) Martine

P.S. Only kiding of course!!

Wow, I didn't realize you had to rebuild! In ours they just stuffed the stainless steel tube assembly into the old flue.

I hope you have an operating stove soon. As you say, it's gonna get cold!

Martine: he was probably using his grandfather's old saw!

Walt: GOING to get cold you say? When we had our roof replaced it was mainly because the old one leaked all around the chimney. They demolished the chimney to make it an easier re-roof.

Work verification is "reckme". Make of that what you will!

Ah, that explains it. And, yes, it's a bit nippy out there. Ken's already in the garden pulling out dead plants. I'm waiting for my knuckles to warm up before I head out to the final bits of hedge trimming.