We picked up Célestine from the M. Musseau a week ago on Saturday. 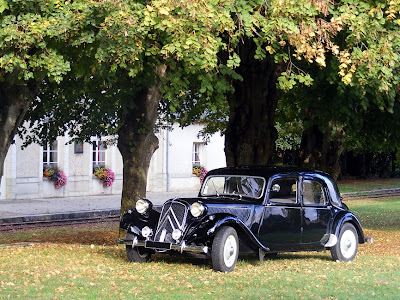 While we were there he measured us up for a new numberplate (plaque d'immatriculation). We have been lucky with the transfer of ownership of the car, because we were just in time to get one of the old style registration numbers. If we had left it another week we would have been given one of the new style numbers which doesn't include the département number. That would have meant we wouldn't be able to have a plate which is white characters on a black background.

On Sunday we went for a drive in the countryside - through the Forêt de Preuilly and Obterre, the two Pressignys (the big one and the small one) and Chaumussay. 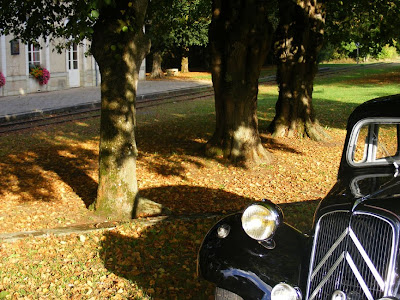 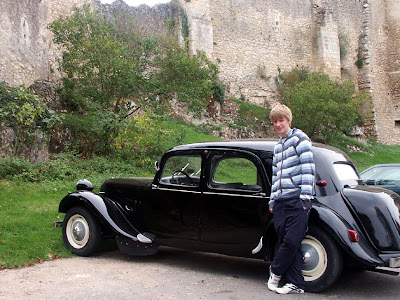 We have all really enjoyed getting to grips with being with Célestine on a long term basis. After her visits to M.Musseau she starts first time nearly every time, she doesn't splutter when you put your foot on the accelerator, and she is a lot quieter since the various holes in her exhaust were welded. Driving her is a pleasure - there is no imperative to rush, and people don't seem to resent you slowing them down. We get waved at by old men and children, and even Porsche drivers wave or flash their headlights. In return I reward them with a crunch of gears, a habit I am working on overcoming.

Your Célestine is a very grand lady indeed. Her name really suits her. I'm sure she'll be giving you a lot of pleasure! Martine

Simon,
Attached is the link to the Citroen Classic owners club of Australia that I mentioned in a previous comment.
They had their Concours deElegance this weekend and you maybe interested in having a look.
Over the years I'd had the pleasure of owning several 4 cylinder TAs and a 6 as well. Many pleasurable years of driving TAs have been replaced with our 2000 Xantia.
Regards
Leon
http://www.citroenclassic.org.au/index.html

Martine
She is addictive - once it warms up

Leon
Thanks for the link - an entertaining read, and some good photos. Do you not miss the pleasures of viewing the world over a huge pair of headlights?

Yes I do miss the my past TAs but in Melbourne traffic, it wasn't the pleasure it used to be.
Living in the country, I wouldn't hesitate to have another in the garage. Prices have become excessive in OZ these days.
Leon