When we are living in France, Susan and I will have to earn an income. 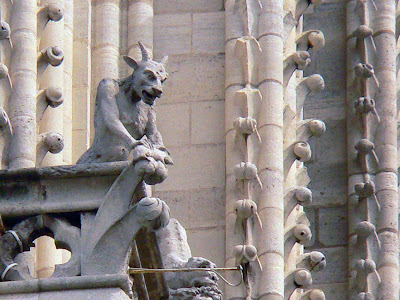 At the moment we are not sure how, but I know exactly what business model we will be using: "the exact opposite to Ryanair's".

Whatever it is we do, we will show a price. A price that you can look at and say "that is what it will cost me". We will not be showing a stupid low price we have made up, adding on all sorts of fees and "government charges" (most of which are made up), adding a charge for using a credit card (which are the credit card fees they are charged, multiplied by 6 and applied to each person, not each transaction).

Nor will we be making up our own exchange rate, telling your credit card company that you purchased in your home currency, and ripping you off another 8% (over and above the tourist rates from the Post Office) in the process.

That way, we hope not to make our customers boiling mad before they have even started.

I know I should know better. I know I should expect to feel ripped off by Ryanair when I fly with them, because that is what always happens. If they were to be honest, say "this is what the ticket will cost" and charge me that amount, I would be happy. I KNOW airline tickets don't cost 1 penny, I don't expect them to cost 1 penny, and I wouldn't fly with any airline where the tickets DID cost 1 penny.

Is there a better way to induce air-rage that treat your customers like this even before you have managed to upset them by the complete lack of customer care once they are with you?

At least soon we won't have to bother with them.

Skype has released version 4. We used Skype quite a lot, both of us having family in Australia, and of course we have to call France increasingly often. Skype does save us a lot of money.

I wouldn't, however, recommend downloading the latest version. It takes a lot longer to load up, and as is the way with these things they have introduced a couple of "improvements" that appear to have no purpose. The most annoying change is the fact that now to place a call you seemingly have to start a "conversation" first. Also, phone numbers are no longer shown with people's names, so as a reference resource it is pretty useless. If you have downloaded the new version and don't like it, you can download an old version here.
Posted by Simon at 10:00

I totally agree with you, Simon. I now take the TGV and Eurostar. It takes longer, but I no longer feel ripped off and abused.

I can also take as much baggage as I like as long as I can lift it.

Simon, you are getting to sound old and bitter beyond your years. Join those of us a bit greyer who feel anger at being forced to make the assumption that a significant number of commercial organisations are basically dishonest, totally profit driven, with their principal tools being practices of the kind you highlight.

We have recent family experience with BMI. My son booked eight return flights, but unfortunately used the diminutive Kate instead of Katharine. He also used John instead of the name which appears first on my passport. Fearing dire last minute complications, he tried to get changes made. BMI could only change the e-ticket by means of a total re-book – for the same flight, but at increased ticket price. Despite a 'gracious' partial refund, the extra cost was £160, when other airlines can manage on a £25 administration fee.
John

Nope. I asked Susan before I posted this and she said I didn't sound over grumpy :¬)

Just amazed that an airline has a business model built deliberately to make its customers feel ripped off whilst actually delivering a low quality product at a fair price-point.

This is what gets me - the price I paid is more or less fair for what is being delivered - and yet I STILL feel ripped off. It's because they lie to make it appear "it ain't my fault gov" (or the Oirish equivalent)

ARGH!! When I was scouring the internet looking for our airline tickets from the US to France and flights within Europe I remember finding great deals and getting so close to purchase until the screen came up with the "actual" final tally of fees, and "services" that made the tickets about 3X the original quoted prices. I would often feel frustrated after all the time researching, only to have to start all over again.

I keep reading (I don't fly much any more) about all the fun airline passengers are having these days. Ken just told me that one airline charges something like $7 for a pillow and a blanket. I'm hoping that was a joke, but I'm not betting on it.

Reminds me of a recent cartoon. Picture it: Flight attendant leaning over a passenger who is obviously choking on some food, "The Heimlich Maneuver is complimentary. CPR is 5 dollars."

Was the food the passenger was choking on complimentary or was it a $10 minuscule, stale turkey sandwich?