It is also close to another less formal border - that of roof tiles.

In Preuilly we have flat tiles, known as "tuiles plates". These tiles are traditionally made in terracotta (in French "terre cuite") and are found in all places north and east of us. The tiles are hung by a little tag on horizontal battens, which you can see quite clearly in this photo of our roof under repair. 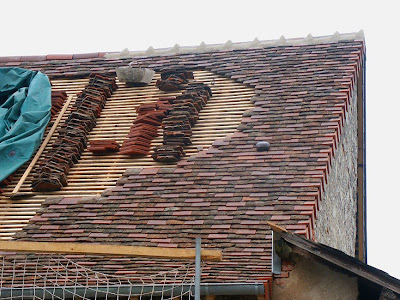 However - travel only 25 kilometres toward Poitiers and you will see roofs of canal or mission tiles ("tuiles canal"). These are also made from terracotta, but are slung in vertical battens, with one tile on its "back", with another tile upturned over the top. This makes everything look very Roman, or mediterranean. These tiles are in St Germain de Confolens, in the Charente. 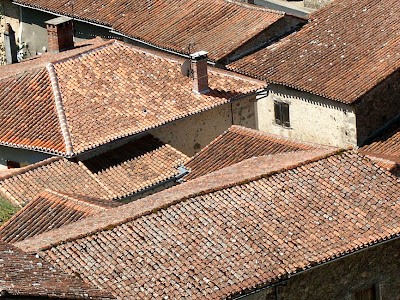 Of course, if you had a lot of money when you built your house, or subsequently came into money and wanted everyone to know about it, you have a slate roof. Like a lot of buildings in Preuilly, our barn has a slate roof facing the street, but a tiled roof where it doesn't show.

Email ThisBlogThis!Share to TwitterShare to FacebookShare to Pinterest
Labels: la Guerche, Our house in Preuilly, Roofing, Towns and Villages near Preuilly

It might be more politic Simon to say that Preuilly was on the border between Anjou and France, that way makes it clear that England was merely a part of the Angevin Empire.
Tiles - thanks for drawing attention one of the glories of Touraine. My source talks of 8 variations of the tuiles plates. As for canal tiles, I had not heard of mission tiles, but am glad to add them to the list which includes tuiles creuses, tuiles rondes, tiges de botte and even romaines. I had thought roman tiles had to have a flat bit, but I suppose I have to accept the authority I consulted.

I was only quoting M.Lezeau, honest! :) His favorite joke revolves around the English reclaiming their own.

As far as Roman tiles go, I thought the bottom tile was a squared half box section, too. Maybe it is a "Roman" tile the same spirit as an "English" muffin...