Last weekend we called in on M. Lezeau at the retrait.

While we were there I asked him about the Roman bridge which we knew crossed the River Claise at Preuilly on the road between Poitiers and Orleans. He told us something we already suspected (mainly from having seen mud maps in various publications) - that the bridge was down at our favorite spot on the river. He also said that "vestiges" could be seen.

Then it clicked..... That little island in the middle of the river. You see, it's in the wrong place for a natural island; just upstream of a weir where the river is at its deepest, a clump of trees growing in the middle of the river with no banks or beaches. What's more, it is directly in line with a road. M.Lezeau then produce a photo he had taken in the early 80's showing the island without trees

This excited me, because I like Roman stuff, so at the first opportunity (more or less) I went down and took some photos.
The mysterious island 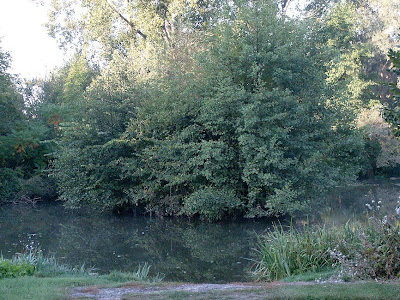 The road leading from the bridge 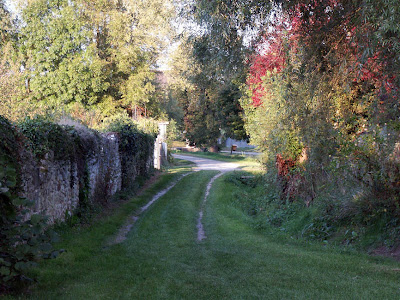 It is assumed that the bridge looked something like the bridge at Patras, in which case this is the base of the central pier. I am wondering though; the weir downstream is obviously post-Roman, so the river is probably wider than it was in Roman times, and in its natural state (which is difficult to find) the river is only about 7 metres across. This means that the remains could be the abutment of a single arch bridge, more like this.

It can't compete with a lot of other Roman Bridges. It is even somewhat underwhelming when compared with the Roman bridge at l'Ile Auger just north of Loches. But it is OUR Roman bridge.

I have added a placemark to our map of Preuilly
Posted by Simon at 10:00

Email ThisBlogThis!Share to TwitterShare to FacebookShare to Pinterest
Labels: Pictures of Preuilly, Prehistory