Our house (as opposed to the Granary) has two doors, both on the driveway at the side.

When we first bought the house, both of the doors were sealed up with a combination of nails, screws and expanding foam. The door into the front room is still sealed up this way, but will one day be a "french window" (I wonder - what do the French call them?)

The door into the kitchen was unsealed fairly quickly, but has always had weaknesses as a door. It has dropped considerably over the years, to the extent that unless you are built like an anorexic greyhound the only way get to the door open far enough to use it you had to lift it and carry it open. It also had considerable gaps all around, and the bottom was rotting away. As a door, it was a dead failure.

As I had extra people on hand, (doors are REALLY heavy) I took the door off its hinges and cut the bottom two centimetres off using the benchsaw. Carolyn held up the far end of the door while I drove.
Me, in a blur of action 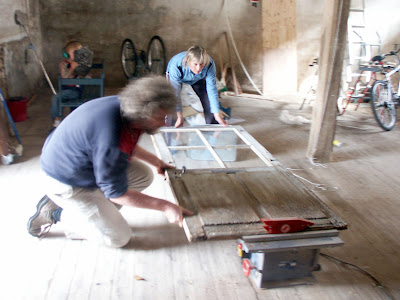 I then screwed and glued a fresh piece of timber - ever so slightly under 2cm thick - onto the bottom. The door was rehung, and surprise surprise, didn't work. This was expected because that's just the way life is. I shaved a fraction off the bottom of the new piece of wood, packed the hinges with a couple of washers, and lo and behold, a door that opened all the way. Even if it did have a huge gap at the bottom when closed. 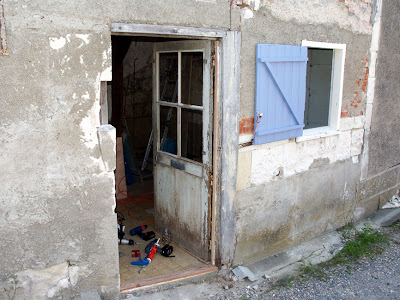 Next day, I attached a sill to the step outside the door, a couple of pieces of trim to the door frame, and a rubber draught excluder strip to the door itself, all with plenty of screws and silicone gel. 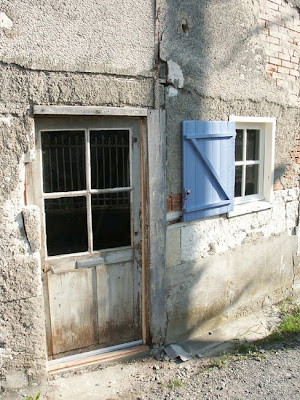 A couple of days later ( you can't rush these things) I cut a thin wedge of wood (a shim, I believe) and glued and nailed it to the top of the door to compensate for where it had dropped. I now have a fully functioning door that opens without being lifted, and closes to a near draught proof state.

Yes, it's ugly, yes, it is only temporary (even more so than the previous door fixing) but it is now a door - as doors should be.

Shim. What a fun word. Just last night I was watching a popular American do-it-yourself show called "Ask this Old House" that comes on our public television. Well I, since having worked alongside my very knowledgeable husband in areas of carpentry as we finished out our own home, become easily enthralled in areas of home repair. Last night the Professional carpenter helping a family replace a garage door used a shim and I giggled, and today, yet again "shim" has worked itself into my daily lexicon. What fun. THe door looks great. I am sure it is a pleasure to check it off your involved to do list. Happy home remodeling!

I have always wondered: aren't all doors in France French Doors by definition?

Of course, in the US I have known French doors and Dutch doors, I presume to distinguish them from good ol' American doors, not to mention The Doors, but I digress...