Why I am not Always in France

How come I wasn't able to join in the fun and festivities of events such as the Tour de France whizzing through Preuilly-sur-Claise?

Well, on 9 July, I had to attend a meeting at the Land Registry office in Lincoln's Inn Fields in London. Just quietly, the people at this meeting are the ones who really rule the world. These people are Geographic Information (GI) professionals. Some of them are good old fashioned cartographers (otherwise known as professional map nerds), some of them are probably Spatial Analysts (and everyone who reads the British newspaper, the Telegraph, should now know what they are). What these people do pervades every aspect of modern life, and without the software they design and the information they provide, our experiences of shopping, travelling, communication and understanding of natural phenomena would all be considerably less sophisticated. 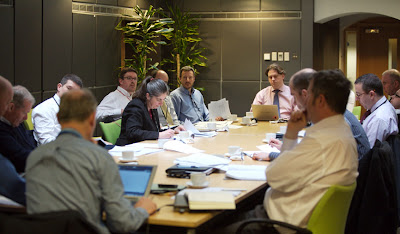 Despite the fact that several of the people around this table are serious cycling enthusiasts, we still managed to schedule this meeting for 9 July, in London. I suppose it could have been worse – Lincoln's Inn Fields is one of London's most attractive and interesting squares, with the Inns of Court just next door to the Land Registry office, many imposing neo-classical buildings housing various important British institutions, and best of all, across the other side of the square, the wonderful Sir John Soanes Museum, where I took my colleagues for a post-meeting outing. My friend Tim Knox is the Director, so we were treated to a personal, if whirlwind, tour, including getting up close and personal with Hogarth's A Rake's Progress. (This is just an excuse for me to make a shameless plug for the museum, which I can heartily recommend you visit if you are in London.) 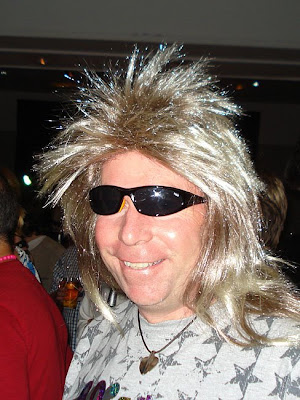 And this man is my boss. I should point out that neither he nor I are GI professionals. He is in fact an accountant, but he is edging towards an understanding of geographic issues in the modern world.

If you are interested in learning more about the world of GI, there are some interesting blogs out there.

I suggest starting with Muki Haklay's Po ve Sham, which means 'this and that' in his native Hebrew. Muki is a Professor at University College London (UCL), and writes on how GI is being put to practical use in the real world.

Then you could move on to Tim Warr's blog. He works for Multimap, who you may notice credited at the bottom of some online maps. Multimap is owned by Microsoft these days.

Steven Feldman's giscussions is also worth a look, as he is a real enthusiast and all round nice bloke.

If you feel up to it, you could go to Ed Parson's blog. He works for Google as their Geospatial Technologist, and operates on a higher plane than the rest of us (he's a very amusing public speaker though). Do temper any reading of his blog by also reading the Fake Ed Parsons. All good fun in small doses, and you will certainly increase your vocubulary.

This sounds like a pretty interesting job. what do you find is the most common misperception people have about what you do?

Susan, all the interesting facets of your life: knowledge in renovation, cooking, photography, history, natural sciences, and now your work (is it too ignorant or nosey for me to ask what specifically your specialty is?)and I am sure so much more make me even more sad that we did not have the chance to meet. Now I doubt you and Simon would have any reason to be in the Waco area of Texas (though if you do, you have an automatic tour guide available plus a place to stay) so I will just have to find another reason to be in the Preuilly area. Thank you for all you share on your blog.

I am what is today called a creative generalist – which is a face-saving way of saying I am one of those intellectual fidgets who never did decide on a career. I do however score very highly on those Myers Briggs type tests as a team player, and luckily I get to hang around with interesting people and learn stuff.

Most common misconception? That I know anything about GI – frankly, I can't tell a raster from a vector from a toid – but I know people who can.