The Eyes Have It

Many people who spend time outdoors find horseflies quite threatening and difficult to cope with. It is true that as a large mammal we are likely to be targeted, but take comfort in the fact that they are actually more attracted to cattle and horses than to us. Also, only the females bite -- they require a blood meal to provide the nutrients to breed successfully, just like mosquitoes.

Be thankful you don't live in Canada, where a good dipterist (entomologist specialising in flies) with a well placed trap baited with dry ice, on a good day can collect 5000+ horseflies, and where they can sometimes be the vector of sickness and drive horses to utter distraction. Here in France, there are quite a few species, but none in plague proportions, and none that will make you sick (although if you one of those unlucky people who have a slight allergy to their bites and come up in a huge hard itchy lump, you could be a bit uncomfortable for a week or so).

So, how do you avoid being bitten? Well, wear light coloured clothing -- horseflies are attracted to warm dark objects. Don't run around getting all hot and sweaty -- that probably makes you more attractive too. If you see one, and it hasn't seen you, don't breath in its direction -- insects that require a blood meal are attracted to carbon dioxide (which mammals breath out). Don't bother to try and swat it -- they are evolved to be tough enough to survive being flicked, slapped and swiped -- it's just one of the hazards of the job as far as they are concerned. Don't leave the windows of your car down when it is parked. Your car is a large dark warm object -- the horsefly is programmed to sit on it or in it. Once you are in it too, exuding CO2, well, you know what the result is going to be...

Once you've come to terms with sharing your world with more equanimaty (or should that be 'equinamity', or since we are in France, 'sangfroid'?) take a second look at a horsefly. They are really beautiful. 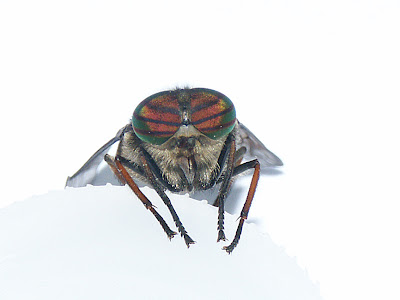 Female Hybomitra sp, photographed in May on the windowsill of the warden's office at the Réserve Naturelle de la Chérine. Hybomitra of several species are common on the reserve, but not seen so much away from the wetlands. Another group of biting horseflies, the clegs, also have colourful patterned eyes, and our picture of a specimen that came from a wooded area on the reserve can be seen here. 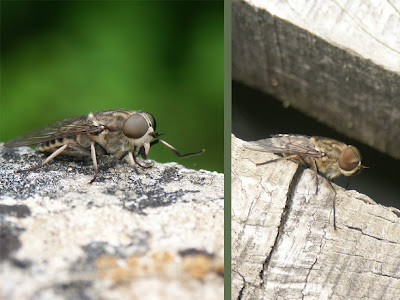 Female (left) and male (right) Large Marsh Horsefly Tabanus autumnalis, photographed in May on a railway bridge near Bossay-sur-Claise and the boardwalk at the Réserve Naturelle de la Chérine respectively. Note the pale streak and the roughly semi-circular faint dark line on the male's eyes -- this is the boundary between two different sized eye facets. Different sized facets give different visual capabilities e.g. some are used to detect movement, some to detect colour, some to detect simple light from dark and shapes. Note also that the male does not have the stabbing mouthparts that the female possesses. This is a moderately large and very common species. 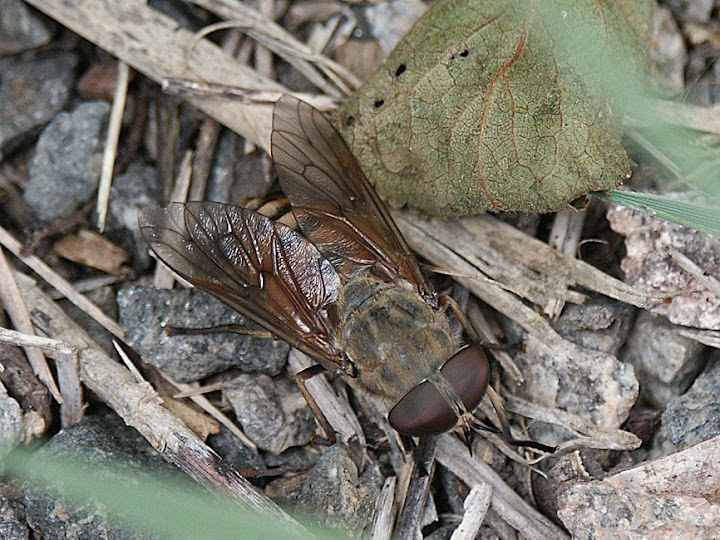 The rather glamorous mahogany and tangerine Tabanus eggeri, a female, photographed on the banks of the Claise in Preuilly in August. This is a large species. Here is another picture of her, showing off her orange flanks.

Horseflies in French are Taons.

Well I have to say I may never be able to see a horsefly as beautiful. We had plenty of them on the coast of North Carolina, and they are a nuisance. They are, however, easier to swat than a common housefly.

Here in Saint-Aignan, we saw a lot of taons in years like 2003 and 2005, when the summers were warm or hot. But now that we have had two cool summers in a row, the taons seem to have disappeared. They are probably all gone to North Carolina, pestering the people on boats and beaches there.