La Source St Marc rises on the hillside behind Chaumussay, the village just downstream from Preuilly. In the 19th century a series of shrines were erected on the hill, connected by box lined trails, for the religious to recreate the twelve Stations of the Cross. Photos exist of this hill as Golgotha, taken in the early 20th century. Most of the shrines are in disrepair now, but one of the main ones, to St Marc himself, sited just below where the spring waters emerge, not far up the hill, is in good condition. 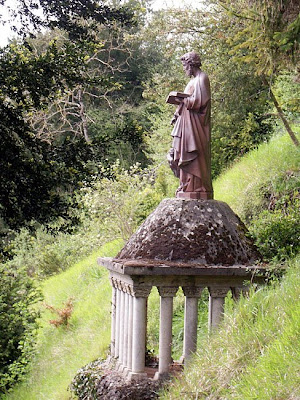 From here the clear icy water runs down a chalk rill, over the camel's nose and into a small pool stocked with fish and populated by frogs. We visit so often, taking every guest here, that I think the man in the house at the bottom of the hill is beginning to recognise us, although we never speak further than polite bonjours. His potager is a lush Garden of Eden, generously irrigated with water from the spring (he has bananas, which fruit every year, growing in the overflow!)

You've done it to me again with your mention of fruiting bananas--I don't want to say it, but I can't help it: oh my god!

Carolyn – lol. The bananas are the sort I call sugar bananas – short and reddish skinned. They thrive, with the spring water diverted right past them so they stand in shallow permanently running water. He protects them from frost in the winter. Our neighbour the Deputy Mayor, a few doors down from our house in Preuilly, also has bananas in his yard.