The Asilidae, or Robberflies, are a large group of often big and impressive looking hunting flies. They hunt by detecting movement, pouncing on other unsuspecting passing insects from their chosen vantage point. If the attack is unsuccessful, they will return again and again to the same rock, log or spot of bare earth, leaf or twig (or washing line). 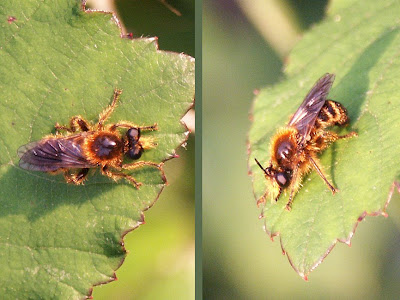 This one is Choerades fuliginosa, sitting on a leaf at the forest edge in June on a farm track at Roux, photographed at 8 o'clock in the evening, facing the low western sun. This is quite a small species, about the size of a honey bee, and not unlike in appearance.

Robberflies possess mouthparts for stabbing and piercing their prey, but do not bite people. There are over 150 species in France, compared to 28 in Britain. The numbers reflect the general climate -- they are hot weather beasts, often seen in the most exposed and sun drenched places.

Most of the facets of their eyes are small, which gives them good high resolution vision, but they also have a very significant visual adaption -- they have some very large forward facing facets, which are positioned in such a way as to give them binocular vision. Compound eyes work well for detecting movement, but to have the combination of hi-res binocular vision, allowing them to judge distance, for precision darting attacks, is very unusual in the invertebrate world. Their legs are covered in spines, allowing them to form a catching basket under the mouth, ensuring the prey cannot wriggle away -- although there is not much danger of that if the prey has been accurately injected with the Robberfly's immobilising poison. (Note that this poison is harmless to humans.) Mostly they eat other flies, but they generally do not restrict their prey to any particular type. 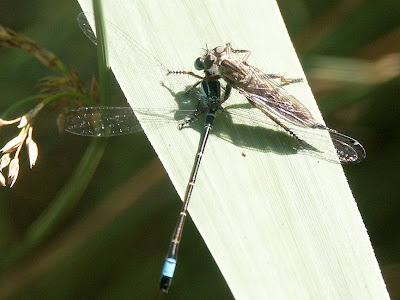 This female is one of the frustratingly difficult Asilinae group -- perhaps something like the Kite-tailed Robberfly Machimus (syn. Tolmerus) atricapillus. Even my expert contact for Asilidae is unable to identify this group to species level from photographs usually. Its prey is an unfortunate male Common Bluetail Damselfly (l'Agrion élégant) Ischnura elegans, and it was photographed at the Réserve Naturelle de Chérine in the Brenne in July.

Robberflies are never numerous, and do not supplement their diet with nectar the way other hunting flies do, so it is more unusual to see them. They have many characteristics in common with dragonflies, and are just as interesting to observe.