A Deadly Assassin Lurking in the Bushes

Between April and August there is an assassin armed with a dagger hidden in almost every bush in Preuilly and surrounds. 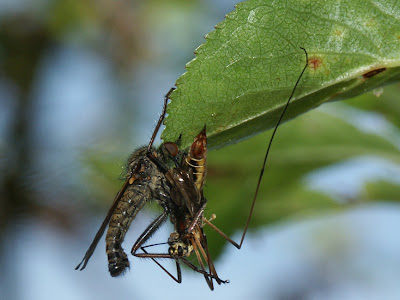 Many flies prey on other flies, like these Empis tessellata, which come from a family of flies known as Assassin Flies. They are not particularly big (about 10mm long) and not really all that beautiful, but they are brave. They'll take on surprisingly large and awkward prey. They kill their prey by impaling it on their powerful long rigid piercing mouthparts, then sucking out the innards. I particularly like the way they hang from one claw whilst using all their other legs to deal with the prey. The females are utterly voracious, eating everything they can lay their tarsi* on, including males of their own species. As a result, male assassin flies come bearing gifts. They will catch a nice juicy fly and present it to the female, so she is guaranteed to be fully occupied eating it, and not of a mind to eat the male while he attempts to mate or after a successful coupling. This one is a male, so he may not be planning to eat his catch himself, but hoping to pull as a result of having such an impressive feast on offer.

When the males are not hunting (for prey or for females), they hang around sitting on leaves in the sun. You can often see quite large numbers on a well placed bush, especially in May, when this species is most numerous and visible. As Tony Irwin, Curator of Entomology at the Norwich Museum says, hanging around sitting on leaves and tree trunks is the dipteran** equivalent of hanging around on street corners and in pool halls for young men with nothing much else to do but check out the women. 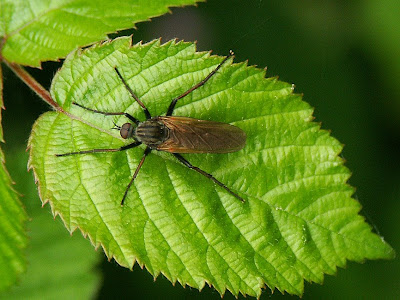 This one was photographed in May at the Réserve Naturelle de Chérine in the Brenne. Lots of his mates were sitting on nearby leaves.

Curiously, there is evidence to suggest that where an Empis tessellata lives will affect the colour of its legs, with those that inhabit woodlands seem to have dark legs, and those in open areas have yellowish red legs. The researchers surmised that it had something to do with the amount of light they receive.

They may have viciously effective piercing mouthparts, similar to horseflies, but they do not bite mammals, so you can safely go out into the countryside or garden. 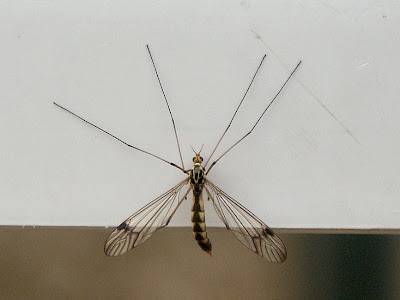 The prey in the top picture is a female spotted cranefly, probably one like this Nephrotoma quadrifaria taken nearby in Roux a week later in May.

*the techie term for a fly, or indeed, any insect's, feet.