[Today's post is written by my sister, and covers what she and her husband did after they left us in Preuilly. All the photos are by Kathy and John. For my post about their visit see here.]
After we left Preuilly we went down to the Arcachon Basin. We found it really interesting with all the oyster farms. In particular the funny little huts that the oyster farmers operate from and their very flat bottomed boats (below).

The Parc Ornithologique de Teich was good with lots of bird hides but unfortunately it was the wrong time of year for the storks or any ducks of interest. We have decided that France and Scotland have no ducks other than Mallards!! We had a great meal at a seafood restaurant where the waitress spoke quite good English and helped John choose something he could eat [John is coeliac]. He reckons the entrée he had was the best meal in France, some sort of salad with prawns and melted goats cheese. I had 6 oysters which were really nice. I am not really an oyster person, although John’s Mum keeps persuading me to try them [John's family live on the east coast of Australia, and take their seafood seriously]. They were large and juicy and very tasty. We also went to the Maison du Oysters! which was very interesting, about the history of oyster farming in the area. We climbed the Dune du Pyla (below) which was quite an effort, and the view of the Atlantic was rather splendid!

It is said to be the highest sand dune in Europe. Being Australian, I was rather surprised France had ANY sand dunes, let alone a huge one.
The Dordogne was fabulous. Our gîte worked out really well and was about ten minutes from five different chateaux. Our favourite was Beynac (below). It was restored as a medieval castle, so it was all dark and gloomy inside, and stands at the top of a cliff overlooking the Dordogne river. We came across it one morning with the sun on it as the mist on the river was just rising. 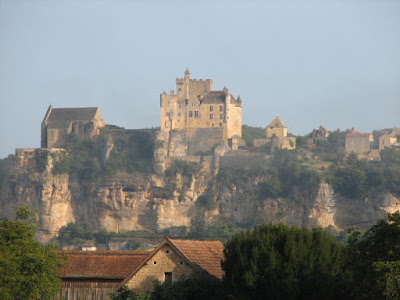 Very spectacular! Another highlight was the Marqueyssac Gardens (below) – fabulous topiary hedges in flowing organic shapes. 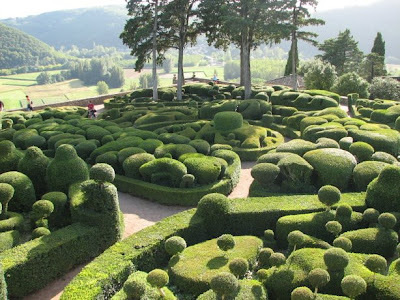 We canoed the Dordogne and even went for a swim, just to say we had been, even though it was not overly hot. Lascaux cave II was good, we managed to get an English speaking tour, so got some good info. We also went to a troglodyte fort and town on the cliff face in the Vezere Valley, which turned out to be more interesting than we had expected. Monpazier (below) was fabulous, a bastide town with an interesting market square.

The market still had some old grain measures in it. And lastly we spent the day at Rocamadour (below) which is a village built onto a cliff so has a number of different levels. It is also a place where pilgrims go and has stations of the cross on a zig zag trail up the cliff face. We got some nice souvenirs at Rocamadour. I bought a coffee pot of painted china, a small leather backpack and we bought Js Mum a beautiful table cloth embroidered with violets (I wish I had bought more). 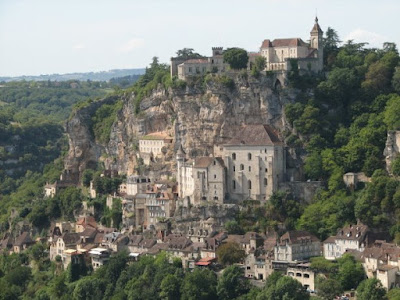 Paris was excellent. We got the train with no drama from Breve and found the hotel no worries. The metro is so easy! We loved it. The afternoon we arrived we thought we better not waste time and we headed off to the Musee d'Orsay. I couldn't believe that you could take photos inside all these museums as long as you didn't use flash! That night, since we were tired, we tried the restaurant under the hotel [not under the same management as Hotel Laumière]. Not a great experience. We ended up with very plain steak and chips! We managed to get to the Cluny Museum of the Middle Ages, Sacre Coeur, Pere Lachaise Cemetery, Eiffel tower, Notre Dame, the Louvre, and the Arc de Triomphe. We had a really nice lunch in a place fairly close to Cluny but on the whole we didn't find eating in Paris as good as we had in the country. The Louvre was great. I had been before so was not worried if we didn't go, so I was really pleased that we had really enjoyed it. We paid for a tour which trundled you round the most famous things, but also gave you a good idea of what else there was to see, so that you could then go back to places of interest after the tour ended. We found the Napoleon III apartments (above) rather fab, and they had some nice glass and Majolica. We were also really interested in some of the Persian and Assyrian sculpture stuff. The Eiffel tower at night all lit up was quite a sight. And Berthillons was closed the day we went there…VERY disappointed. 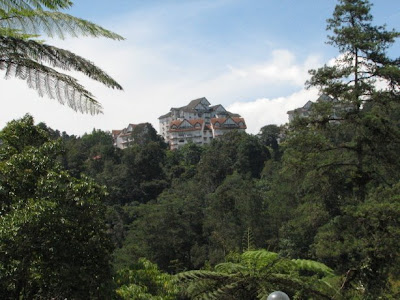 Malaysia was great. We had a bird guide for the 4 days and found it excellent as he took us to really out of the way local eateries where we wouldn't have been game to try without having someone interpret John’s allergy needs. We ate at an Indian place were they served the meal on Banana leaves. They spooned out dollops of everything straight onto the banana leaf plate and you could ask for more of any you liked. The birds were great, rather similar to South America. We spent most of the time at Frasers Hill (above), a well known bird spot in the highlands. We saw 6 different species of squirrels, 3 different monkeys (below) and a couple of different civet cats.

Email ThisBlogThis!Share to TwitterShare to FacebookShare to Pinterest
Labels: Food and Drink, Gardens and Parks, Pictures of Chateaux