Oddly, there are many places in Preuilly named after St Nicolas 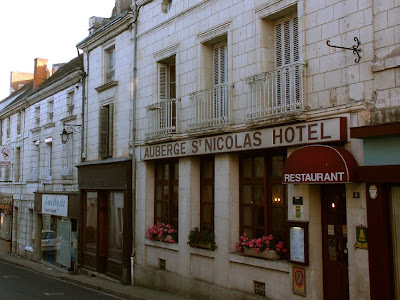 ..............or rather, for a very small town with no apparent connection to St Nicolas to have three features named after him (Auberge St Nicolas, rue St Nicolas, and rue de du Faubourg St Nicolas) seems a bit strange. 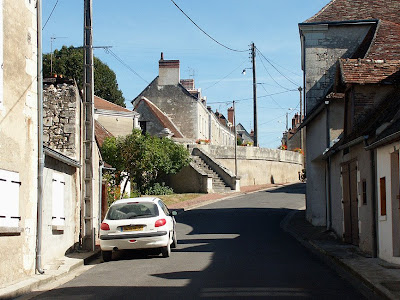 The explanation is, of course, fairly simple. St Nicolas church was one of five in Preuilly in the first part of last millennium (the others being St Melaine, Notre Dame Des Echelles, l'Abbaye St Pierre, and on the southern bank of the Claise, Marie Magdalene).
The Church has a famous connection - l'Eglise St Nicolas was already old when Eleanor of Aquitaine endowed it in the 12th century. The interior was refurbished at the same time and in similar style as Notre Dame la Grande de Poitiers, which she also funded. The style was Romano-Byzantine, with the beginnings of the Gothic becoming evident at the end of the 12th century. The church was particularly known for its numerous fine carvings of many types of animals. Last time we visited Roger Lezeau, after the usual round of "bonjour's" and "ça va's", he immediately hit us with 'So what do you think of Darwin?' Not quite sure what we were getting into, we laughed and said 'Pourquoi?' We needn't have worried – this was one of Roger's little bêtises (jokes) and was his way of introducing some drawings of chimerae in a church in Tours, carved by the man who created similar decorative schemes in St Nicolas.

Ironically, during the Revolution (18th century) the church was used to house animals, as a demonstration of the Revolutionary scorn for the Church. During the 19th century it fell into disrepair and was demolished. Until I visited the local Postern Museum we were of the belief that it had totally disappeared, but a notice in the museum said that one wall and butresses remain. This was a surprise, because we have walked rue de faubourg St Nicolas many times, and had seen no sign of a church at all.

It just goes to show, though. Once you know what to look out for, life becomes easier.

We suspect this may have been a church 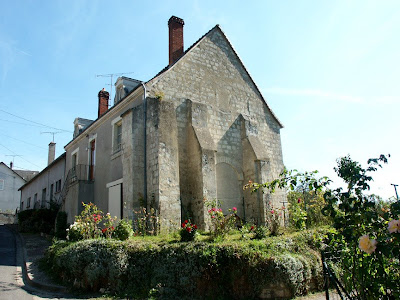 You can even see the 'mortar' lines that have been painted on the walls to create a proper impression of regular, finely cut stone. 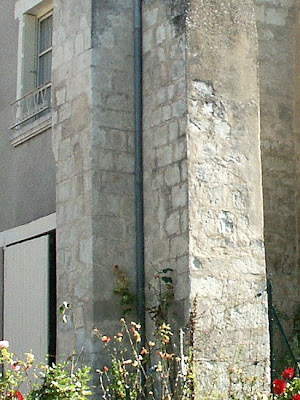 Simon and Susan
Posted by Susan at 10:00