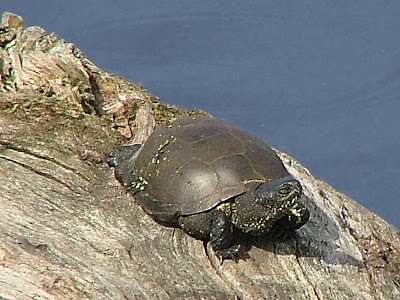 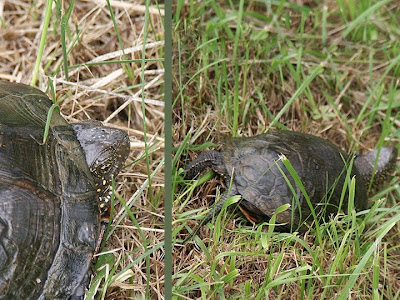 It overwinters buried in the mud at the base of the reeds in an étang but emerge to lay their eggs on the neighbouring heath and grass lands. The mounds of aquatic vegetation form their preferred hunting grounds. They mostly eat invertebrates, but will not disdain a dead fish. 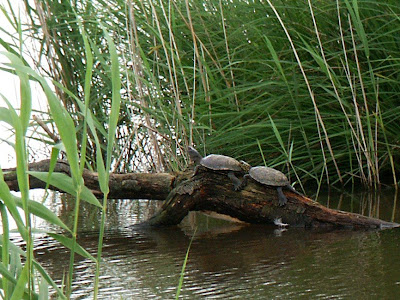 They are very easy to see during the summer in the Brenne from any bird hide, as they enjoy sunbathing on the logs placed in strategic places by wiley wardens hoping to entice kingfishers and other birds to enhance the visitor experience. 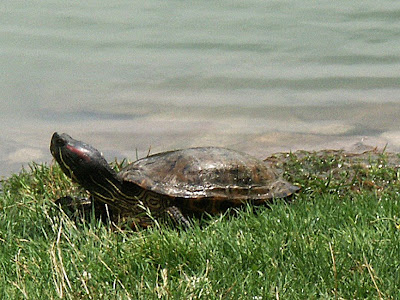 In the last 15 years they have been challenged in the Brenne by the presence of a foreign invader, the Red-eared Terrapin (above). This North American species is bigger and meaner, so there is a policy of removing any Red-eared Terrapins from the Chérine to protect the native species.

European Pond Terrapins enjoy full national protection in France and the Brenne is most important of two principal areas in France that they occur. At present they are not really threatened, but because they require a very specific type of habitat, the numbers would very quickly drop if the habitat too was not protected, and conservationists monitor the terrapins quite closely. This year there was a project to radio track some of them to learn more about their lives and habits.