I realise that we have mentioned the Mairie a number of times, without actually talking about it. 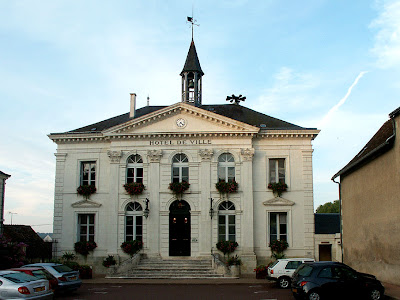 The current Mairie is on the site of the old pork market. In about 1855 a man called Ernest Fumey built a private house on the site, which subsequently passed to his son Raoul. The house was built in the style of the local chateaux, notably the chateau de la Berjaudière on the road to Yzeures. (To my mind it also looks extremely similar to Fontbaudry, on the road to Loches).

In 1933 Raoul Fumey died, and his heirs decided to sell the house. It was bought by the council and eventually, in 1936 it became the Mairie, which up until that date had been in an old building across the road (where la Poste now is). There had been a front garden with large chestnut trees behind a wrought iron fence, which was removed to make a car park, and a clocher (bell tower) was built to take the bell from Notre Dame des Echelles. 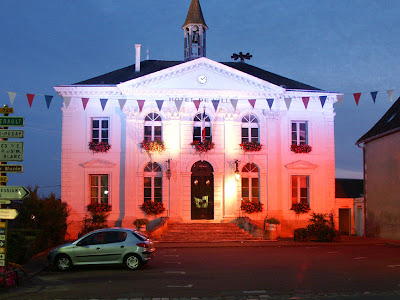 In April 2008, the street beside the Mairie, which had been named "rue de la Republique" was renamed rue du Marche aux Porcs.

We also have a photo of the back of the Mairie here. It is interesting that although it is the Mairie, we have never actually been inside this building. All the business is done from a new office built into the back of the building and accessed off the rue du Marche aux Porcs. So far we have been there about our water supply, and to collect a "Pas de Pub" sticker, but that's it. No doubt we have many visits ahead of us, but the people there appear to be friendly and clued up, so we're hoping our experiences with French bureaucracy will remain mainly painless.

Goodness, that renaming sounds worthy of Clochemerle: was it a comment on the Mairie or the Republic? Was there a punch-up?

Autolycus raised the vital question. I wonder, though, if "pork" in France in regard to public funds means the same thing as it does in the US.

We joke, we joke.

May we use this photo in our forthcoming "The town halls of France and their restrooms (a sample)"? We had the pleasure of explaining to some first-time visitors what exactly is the imposing building called "Mairie" in nearly every town. They were pleased (and may I say relieved?) to learn of the vital function a mairie provides for travelers.

It's amazing.....because we know the back story, the pork barrel/snouts in the trough thing never occurred to us (not that we would have mentioned it, we are both far too polite, you understand!).

The street was called rue du Marche aux Porcs before the revolution, so it's a re-rename, and we're just rediscovering our heritage.

Hi Simon, Just wondering why there is a sign saying Hotel De Ville on the front of the building...was it an hotel at some stage ?

Anon:
an "Hôtel" in this case is a grand town house, rather than a lodging place. A lot of large townhouses in Paris are Hôtel e.g Hôtel de Sully. An Hôtel de Ville is therefore House of the Town. I am not quite sure of the difference between the Hôtel de Ville and the Mairie, but with any luck chm will pop by! Other government head offices are sometimes called Hôtel too e.g. Hôtel des Postes, Hôtel des Gendarmes. I think there is some nuance of administrative function involved e.g the difference between the town hall and the council offices.