In late summer it is very common to see little plots or strips of land, or even sometimes whole fields, covered with a riot of colourful flowers. Occasionally, these fields of flowers have a sign telling you they are 'Jachère'. 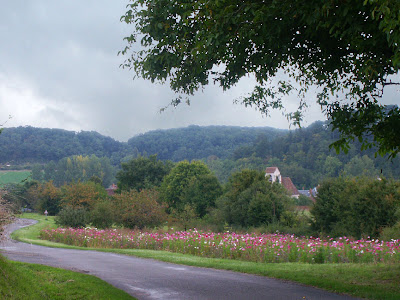 This scene, heavily wooded ridges above fields which slope down to a village, in this case, Chaumussay, sitting on the river banks, is absolutely typical of the Val de la Claise Tourangelle.
Jachère is what in Britain is called 'set aside'. It used to be obligatory, part of the much derided Common Agricultural Policy (CAP), and rewarded by a subsidy, to put aside a certain amount of land and leave it fallow for the year. In France it has become the norm to indicate 'set aside' by sowing a mix of annual flowers, known as 'jachère fleurie', as farmers are not allowed to leave the earth bare (which would allow the proliferation of undesirable plants such as thistles). The seed mixes, in colour coded selections, are rarely native species, but many hope that they encourage beneficial insects, especially bumblebees. There was some research into this in Holland, with the view to enticing bees into an area, who, it was assumed, would then move on to pollinate the nearby crops. Sadly though, it turned out that these flower mixes made no difference to crop pollination – perhaps the bees are too interested in the flowers and don't bother with the crops). In the Touraine I don't think they can be used with this in mind, as they flower some weeks after the summer crops have been taken off, and after ploughing has started for the next crop. Here I think they are used partly just because people like to brighten up the landscape, but also to inhibit the growth of agricultural weeds in areas of waste land.

Usually the mix of seeds is very heavy on the cosmos, but sometimes you see mixtures with a high proportion of California poppy. They are tough enough to survive uncared for after sowing, but do not seem to volunteer year after year or escape into the wild and compete with the native species. Set aside plots are often not rotated in the way land left fallow in a traditional system would be. Often the same plot is set aside year after year. The modern arrangement was primarily a means of controlling overproduction of grain by reducing the amount of land under active cultivation, and so set aside has to be a piece of land that has been cultivated in the past, not a piece of land that has never been ploughed. Although the real reason for set aside was a piece of politico/economic manipulation, it is generally sold to the public as an environmental benefit, providing habitat and food for invertebrates. This is indeed a positive thing, but there is rarely any consideration of how big or what shape a piece of set aside needs to be or where it needs to be situated in order to maximise this much vaunted environmental benefit, or even very much thought about what species should be sown. 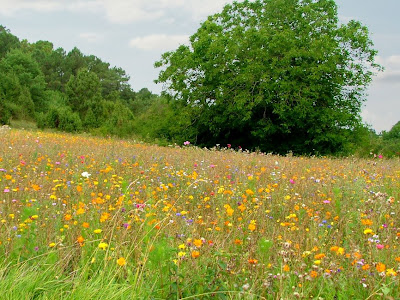 This year set aside was somewhat controversially set aside (i.e. the obligation to have a certain area of set aside was abolished). Last year 3.8 million hectares were set aside in the European Union. This year, a more complicated system was introduced, designed to encourage farmers to engage in a wider variety of environmentally friendly activities such as installing beetle banks and laying hedges. But jachère clearly remains popular in France, and certainly provides many photo opportunities.

For a couple of very stylish photos of jachère fleurie taken a month ago at the fairytale Château de Montpoupon, go over to Ken's blog Living the Life in Saint-Aignan.

So that's why there are so many fields of cosmos. I was thinking they must be grown as a seed crop, but the plots aren't really big enough for that.