This is a topic that is very current in the UK at the moment. Jamie Oliver is the high profile figurehead of a campaign that has been waged over the last few years to improve school meals (shockingly, less was being spent on school meals than on prison meals – and in both cases we are talking considerably less than a pound a meal total spend). The government has increased funding and parents are being encouraged to opt for school dinners rather than giving their kids money to buy chips and chocolate for lunch. A good deal of the credit for this goes to hard working real dinner ladies like Jeannette Orrey, who provided the genuinely concerned but perhaps somewhat over exposed Essex lad with his inspiration.

Simon's experience: When I started school in Australia, things were different. We didn't have school dinners, we had a "tuckshop" (stop giggling) twice (?) a week, staffed by volunteers. Orders had to written on a brown paper bag inside which were the few cents needed to pay for lunch, to be handed in before school so the sandwiches could be made by 12.00. I can only remember two types of sandwiches; Coon Cheese and tomato sauce (i.e. ketchup), or devon and tomato sauce. On white bread, of course.

Susan's experience: I went to a primary school that only had 22 pupils. I remember we had a regular dose of a half pint bottle of milk, unrefrigerated and disgusting (and completely pointless, as I and probably every other pupil lived in a household that kept a house cow). Once in high school I too had a tuckshop a couple of times a week, run by the mums and supplied by the local baker and grocer. The most desirable item I seem to remember was a sweet log shaped fruit bun with pink icing sprinkled with coconut known as a coffee roll (I was never that excited by them, but I was a southerner and presumably didn't understand).

In France, naturally, it's a whole different ball game (or so it appears to outsiders – but there are plenty of stories of French people unable to face certain classics of the cantine in later life.)

Every Monday morning you can see parents dropping their children off at school and then checking the noticeboard by the gates. This is where the schools paste up the week's menu for the perusal of all interested parties - quite what course of action is available to a parent if they don't like what they are reading we are not sure. The menus look pretty appealing, although occasionally rather challenging as kid's menus (look at some of the entrées and count how many children of your acquaintance would happily tuck into cucumber or grapefruit).

The menu from the State Primary school in Preuilly-sur-Claise 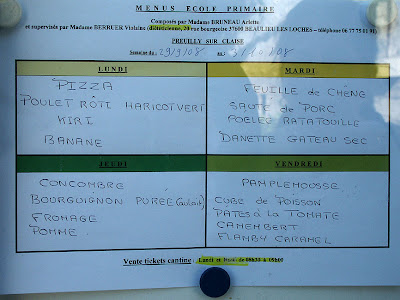 Translated, the kids are having:

Monday – Pizza; Roast Chicken with green beans; some mysterious item called Kiri; and a banana.
Tuesday - Oak Leaves (whatever they might be); pan-fried pork and a tomato, aubergine, peppers and zucchini stew; and a plain chocolate yoghurt cake.
Thursday – Cucumber; Burgundian purée with milk (whatever can this be?); cheese; an apple.
Friday – Grapefruit; Fish Cube; pasta with tomato; camembert cheese; a sort of caramel blancmange that comes in an individual jelly mould shaped pot and is a classic of the French school cantine, featuring in a practice known as 'gobage de flamby', which I imagine is ruthlessly discouraged by those in authority. 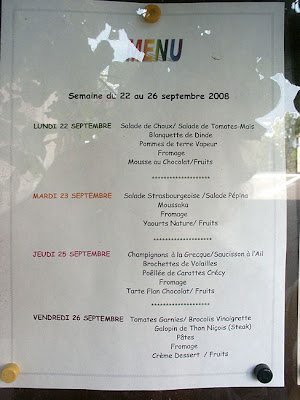 At the private Catholic primary school, they were having:

What do the poor little souls get to eat on Wednesdays I hear you ask? They only have a half day school on Wednesday, so they go home for lunch.

For comparison, here is a menu from an exemplar primary school in England (good menu too, but interesting how different it is – far less fruit and dairy, but all three schools serve fish on Friday):

All three schools will serve bread with every meal.