Not the cathedral (although that is pretty impressive), but the staircases.

A number of building in Tours have an arrangement similar to that I think our house originally had. The staircase, instead of being built inside the house, is in what amounts to a tower against one wall. 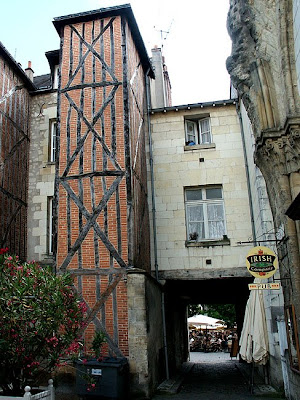 My reasons for thinking this is that our staircase has its own roof - it is a hipped roof that covers only the staircase, most easily seen in the long distance shot from across the valley before the roof was replaced 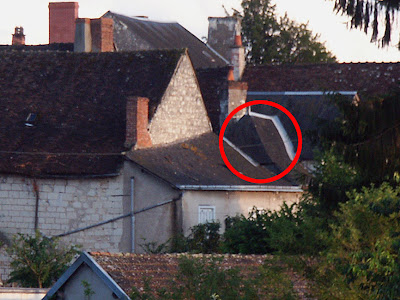 If it's true, this is quite exciting for me. One of my criteria when we were looking for houses (and one I thought we hadn't met) was that it should have a tower. Now, not only does it appear to have a tower, but it has a hidden tower.

We know that the house is a lot older than its facade and the roof structure gives the impression of being 15/16th century (according to the philosophical roofer). This could be yet another clue in helping us decypher the story of our little piece of history.

Email ThisBlogThis!Share to TwitterShare to FacebookShare to Pinterest
Labels: Our house in Preuilly, Roofing, Tours, Towns and Villages near Preuilly

What's under your tower now (I hope that's not too personal a question...)?

At the moment there is a staircase shaped space on the ground floor (with a ladder in it), and a half rotted away staircase on the first floor.