I know that as a semi-retired rock and roll superstar and all round well know person (let me have my dreams.......) I should be used to seeing myself on TV and in the newspaper.

Like all people of that ilk, I can't resist looking for myself. So when I received the videos of the Tour de France I had to go through them frame by frame. All three sets. Although the picture feed is the same for the coverage in Australia, France and the UK, the editing is different. They all go to ads at different times, and the UK broadcast went to a special feature just at the wrong time.

On the Australian broadcast though.... THAT'S ME!! You can tell that, because I am at least a metre taller than anyone else in town. 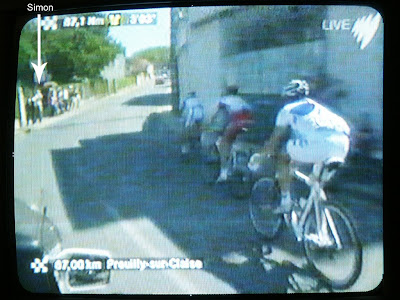 Yup, it isn't a good image. It's a photo of the TV screen. But that is definitely me.

We didn't see you on the French coverage because they did mostly aerial shots in Preuilly. And nobody looks taller from a helicopter. ;)

I dunno - I cast a longer shadow than most.

(the man who said wider can leave now!)

It might be you Simon in that lightblue shirt but there is a woman standing in front of you that attracts the eye. Sorry.
"tv-viewer"