A little while ago I wrote about the magnificent Cedar of Lebanon in the grounds of the château at la Celle-Guenand and promised to write more about the château.

It sits in the middle of the village, and quite a good view can be had from the footpath looking through the railings of the gate. It particularly attracted our attention because the roof of one of the wings was being repaired -- and it is one of those proper château roofs, with pointy bits. 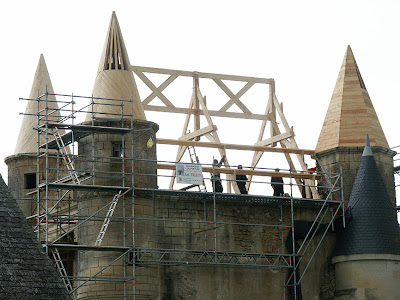 The turrets at different stages of completion. 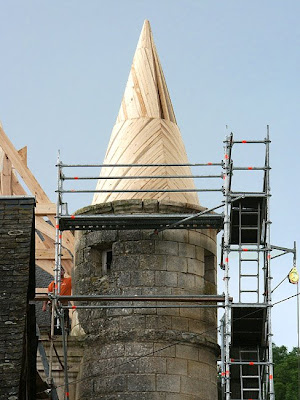 A detail of one of the turrets showing how the base of wood is laid before the slate is applied.

Being able to see the work in progress was fascinating and we stood in the gateway looking and photographing. There were three men up on the scaffold, and when one of them came down to fetch something he asked us if we would like to go in and look around. "Oooooh, yes please", we said, "we're roofing fetishists." 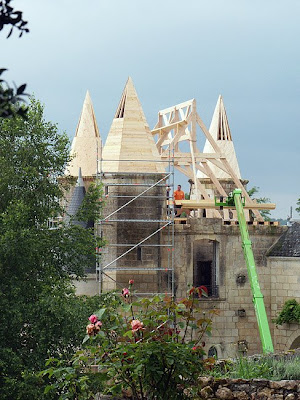 Here the roofer's all-purpose machine is lifting up small beams for the next stage of the frame.

The driveway curves around to the right and the grounds stretch away up the slope. There is a potager with a glasshouse on the lower terrace and an arboretum cum ride on the upper terrace. Behind the main part of the château was a surprise -- it is built on one side of a small limestone gorge, which you cannot see at all from the front, and behind the main block, the land drops away vertically, creating a small hidden valley. On the other side, cut into the rock, were a number of caves -- some for wine, some for the storage of other odds and ends of château life. There was also a large pile of partially burnt wood in the gorge itself. It was clear that these were the old roof timbers from the wing that was being repaired and that there must have been a fire that damaged the roof. 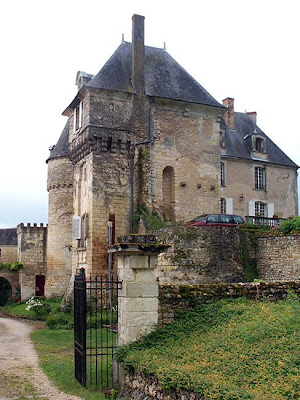 The main block of the château. The picture is taken from the driveway near the potager, and the wing under repair is just out of the picture to the left.

Once we re-emerged around the front, we went over to thank the man who had invited us in. He turned out to be the owner. He told us that he and his two sisters had inherited the place when their parents died. They run a chambres d'hôte (bed and breakfast style holiday accommodation) in one of the stable blocks. (The other stable block I got the impression houses the local hunt, but I might have been mistaken.) The roof of the wing being repaired had indeed had a fire, but the charcoaled wood we saw was only the unuseable remains. Many of the very big, very old beams had been salvaged and were carefully stored in a safe place, having been so hard they were just a bit scorched in the fire, and would be reused.

The block being repaired was the original entrance to the château, and is connected to the main house by an elevated, enclosed walkway, under which is the original carriage gateway. The main house once had a drawbridge too, above what is now the front door. You can see that this area has been altered when the entry level changed from first floor to ground level. 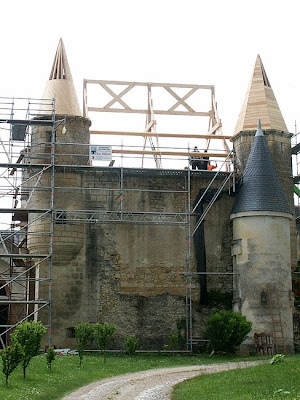 Note that one of the turrets is hexagonal, whilst the others, including the beautifully finished lower one, are conical.

We were introduced to M. Frelon*, the roofer, a big, well-built man in a tightly fitting orange tee-shirt and his assistant Dominique. They were relaxed, charming and friendly, and offered their elbows (this is a politeness one comes across often when greeting artisans. It is in lieu of shaking hands, because they were worried their hands were dirty.) It was a real pleasure see such skilled traditional work at close quarters, and we wished them bon continuation.

*Apologies that I can only show you tantalising glimpses of M. Frelon's manly frame, working up on the roof. I do have a picture of him on the ground and smiling at the camera, taken by my mother, but it's on an external drive that I don't have access to at the moment.
Posted by Susan at 10:00

Email ThisBlogThis!Share to TwitterShare to FacebookShare to Pinterest
Labels: Pictures of Chateaux, Roofing, Towns and Villages near Preuilly

I am green with envy at your good fortune to see round the château when interesting things are going on. It is a great strength of your blog that you present such a wide range of material with good pictures and thoughtful text.

Am I correct in thinking that the roof timbering is being done in softwood rather than oak? A shame, but no doubt a very deep pocket would have been required for that.

Fascinating. I'm just reading an article about manoirs in Le Perche, whose towers are the source of their charm, says the author, and "les charpentes...ne sont malheureusement pas eternelles." But engineered wood ought to do the job.

My dictionary doesn't help with "decele" so I'll quote again: "...dont l'aspect decele un gout plus ou moins discutable de la part des restaurateurs." May your M Frelon be one of the better ones.

Louise - I think this means something like 'whose appearance betrays a rather debatable taste on the part of the restorers'. I am sure that M. Frelon was doing a beautiful and sensitive restoration.

Jill and John - blush. You are so nice, and we are very lucky to have such loyal and supportive readers.

I didn't ask about the wood, but by it's appearance I would say it is sapin (softwood). We weren't even offered oak for our roof, and our M. Galland did a beautiful job - I suspect the price of oak is astronomical. When we got our staircase quote, to have it in oak rather than exotic hardwood doubled the price. These days for roofs they seem to use composite beams, as in Pierre-Yve's studio across the road from us which we showed a picture of here: http://daysontheclaise.blogspot.com/search?q=composite. Fortunately in our own roof, we needed very few large pieces of timber - we were very lucky.