Buildings on the Market Place - The Hairdresser

The hairdresser's on Place des Halles, Preuilly sur Claise, run by Marie-Noëlle and her assistant Sandrine, was previously a co-operative grocery, before that the clothes shop Welter and before that, in 1920, a bazaar called Cacahouète (Peanut). 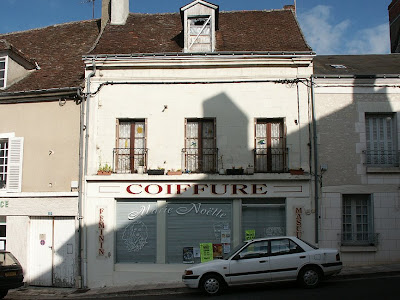 Roger Lezeau says: The Peanut Bazaar was really something! Father Peanut (we didn't know his real name) was an old man, sensitive to the cold, who, despite wearing several jackets one on top of the other, still dreaded the least current of air.

He claimed to have everything. He was proud that in addition to the peanuts, the goods ranged from liquorice paste on spools; socks and galoshes; curry combs for horses; night caps up against clogs; violet pomade for the grandmothers' hair as well as postcards in his name.

He sent his loyal employee, Marguerite, out to the fairs in the area in an uncovered cart yoked to a donkey. One day she found herself caught in a rainstorm and got soaked; whereupon the 'bones' in her corset, made of steel, rusted - but no matter - the Peanut Bazaar also sold corsets and corset 'bones'!

(Roger Lezeau's anecdote translated from his article in Les Cahiers de la Poterne, No34. Monsieur Lezeau was born in 1912 and is a great source of knowledge about the history of Preuilly.)

Those of you familiar with France will know that small French towns seem to have a remarkable number of hairdressers. Preuilly has a population of less than 2000, serviced by three salons and at least one other hairdresser who does not have a salon, but visits her clients in their homes. I would say that Preuilly is slightly below average on the French hairdressers/head of population scale but the town doesn't seem to be suffering a crise des coiffures as a result, thank goodness. Au contraire - we also seem to be slightly lower on the French national scale of ill-advised use of red hair dye/head of population.

Burgundy is a fine colour...in a wine...but a curious choice of hair colour (and, ahem, door fitting).

Presumably Preuilly can support all those hairdressers, but how? After all, how often does someone get their hair cut? Aha! Maybe it's not the cutting that requires a hairdresser, it's the dyeing process. That particular color may be a make-work ploy by the union of hairdressers, and not a color choice by someone who sat down with a paint chart and picked that red.

Yesterday's post on the new museum was wonderful. I've put it on my list to do if we get that far south. You are so up-to-date!

My impression is that many French women have a regular weekly appointment at the hairdressers. As someone for whom a visit to the hairdressers is at most an annual event, I am not really sure what more frequent clients have done.