Hawkmoths (Sphingidae) are my favourites amongst the moth families. I think it is their stylish streamlined jet fighter lines. Also, many of them are entirely or partly day flying, so they can be observed in colour and comfort. 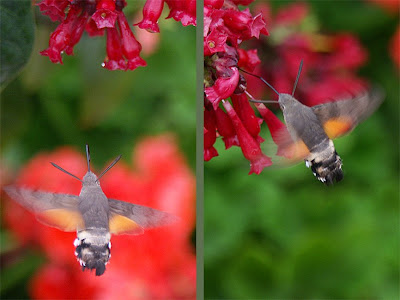 This one is the day flying Hummingbird Hawkmoth, Macroglossum stellatarum, photographed at the municipal flowers in the main street of La Roche Posay. Note how it holds its tongue rolled up like a watch spring as it approaches a flower (left), then extends the tip using the hinge half way along the tongue (right).

Uncle Geoffrey, who is genuinely petrified of moths, found this one so cute and interesting that he happily stood within feet of it while it worked over this bush.

The scientific name means something like 'big tongued starry backside'.

Hummingbird Hawkmoths make a soft hum as their wings whirr. I have never seen one at rest -- they even sunbath on the move, soaking up the warmth of sun-drenched walls by hovering in front of them. They are common in France, especially in gardens and floral parks. They are appearing in Britain in increasing numbers, right across to Northern Ireland, but they are migrants. The hotter the summer, the further they get. In a good summer they will reach Scandinavia.

Their large green caterpillars, with their sharp little 'tail', characteristic of the family, feed on bedstraws Galium spp and Valerian Centranthus spp. With a wingspan of 4-5 cm, they can be seen in all but the coldest months in central France. 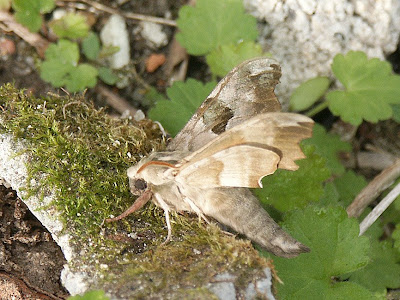 The second photograph shows a Lime Hawkmoth Mimas tiliae. These are quite variable in colour and pattern. This one is a rather intermediate greeny brown. They have rather a short sad life as adults, having no mouthparts, so they cannot feed. Their sole purpose is to find a mate, after which they slowly starve to death. The caterpillars are very similar to the Hummingbird Hawkmoth's, only lacking the racing stripes down the sides and substituting fine orange flashes. They feed mainly on Lime Trees Tilia spp but also on Elm Ulmus spp and Alder Alnus spp, transforming into adults during May to July. This is a lowland species, living in woodland, parks, gardens and even street trees. This species is nocturnal, but often seen because it is attracted to bright lights. They are slightly larger than the Hummingbird Hawkmoths at 6-8cm.