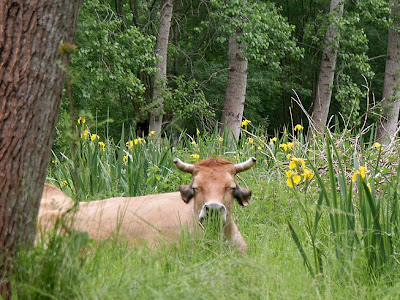 Isn't this the most smugly contented cow you have ever seen? She is a Maraichine, a breed developed in the Marais Poitevin** from the blond Limousin breed, and she lives on an island in the network of canals around Coulon. She is a beef breed (or perhaps a dual purpose breed). According to the official breed description the usual number of horns is two. (I checked other breeds for 'usual number of horns' -- disappointingly, they all seem to be zero or two -- I was really hoping to come across 'three' or 'six' or something a bit more out of the ordinary.)

I did wonder whether I should call this post 'Les Vaches Maigres et les Vaches Grasses'. The phrase comes from the story in Genesis about Pharoah's dream of the seven thin cows and the seven fat cows. In French the expression is used to indicate a state of penury or plenty. She is clearly the fat cow and we are the thin cows just at the moment. Apparently, all sorts of animals can be used to create this metaphor, including, to my surprise, les ornithorynques (platypuses). My source for this information does admit, though, that some animals are easier to slip into the conversation than others.

*La Vache Qui Rit (the Laughing Cow) is a brand of processed cheese, most commonly encountered in the UK as the snack-sized red-wrapped cheese disks sold as Babybel. 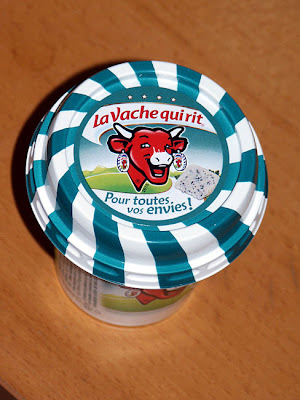 **The Marais Poitevin is one of the top three most important wetland habitats in France, situated to the west of the Touraine, in the Vendée between la Rochelle on the coast and Niort. Much of the land is reclaimed.
Posted by Susan at 10:00

Last year we saw a photo of a brown-eyed bovine beauty, the maraichine, in an exhibit of heritage breeds and I was smitten. I had hoped to track down a herd on our upcoming trip so I could see one face to face, but so far no luck. Is yours a photo you took near Preuilly?

Your cow seems to be content with that flowery meadow (and so would I be).

Louise - this photo was taken in Coulon, which is a couple of hours to the south west of Preuilly (it's just west of Niort, and I am sure your guide books will have a picture - it is the heart of the Venise Verte, and we can thoroughly recommend a boat trip from Coulon - our cow was photographed from the boat). I doubt you will see Maraichine anywhere but the Marais Poitevin/Venise Verte/Vendée.