In a previous post Simon wrote about the rock carvings at Angles-sur-l'Anglin.

It seemed amazing to us that we had never heard of something that claimed to be "the sculpture equivalent of Lascaux", especially when it was only 20 minutes from our house. It first came to our notice when Simon was reading about caving lessons given by the "Spéléo Club Anglois", but he had real difficulty finding any details. 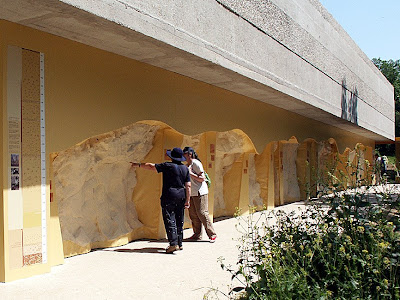 Well - no longer. Since March '08 there has been a Museum "Roc-aux-Sorciers". We visited the museum with Susan's parents in May, and were well impressed with the exhibition. 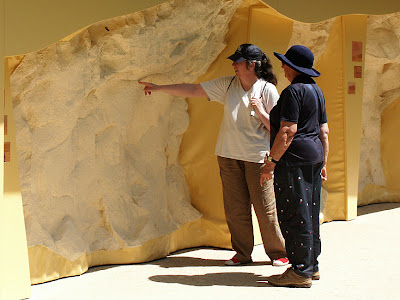 At present all the information is in French only, but the very nice young man at the front desk who spoke English suggested that we walk straight through the son et lumière and around the back to where the carvings have been reproduced in fibre glass. He said that once we had looked at them, the audio visual presentation would make much more sense. Good advice, and the son et lumière is very nicely done, evocative enough to get across the idea of the caves changing occupancy and form over time without the need for too much language. 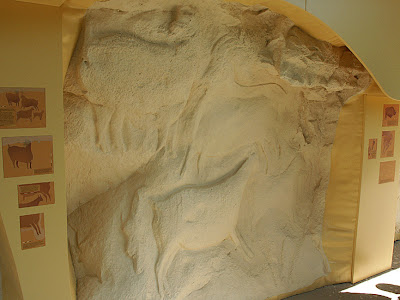 The importance of the caves and their carvings is that they are an extremely rare example (perhaps unique) of people living in the cave they decorated. The hunters and artists who lived here were Cro-Magnon, from the Magdalenian period (18 000 to 10 000 BC). The caves were only occupied for a short period, then filled up with sediment, thus preserving the traces of human occupancy and the detail of the carvings.

They were discovered by Suzanne de Saint-Mathurin in 1950 and there are some charming photographs of a number of locals as children helping with the original dig. It reminded Susan of photographs of the early dig at Sutton Hoo.